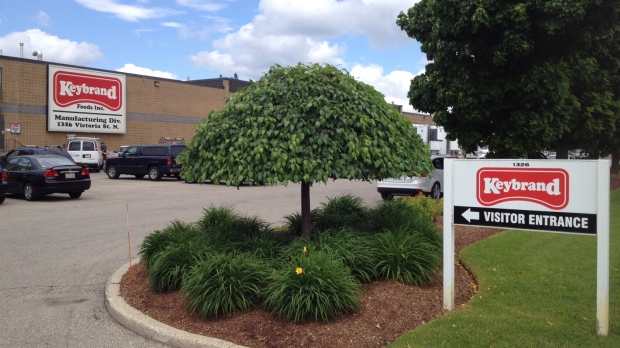 About 21 employees at Keybrand Foods, a food processing company in Kitchener, were treated for carbon monoxide exposure on Friday afternoon.

Around noon, the workers showed up at the Grand River Hospital.

Doctors at the hospital say they showed signs of acute carbon monoxide exposure.

“In this case it was mostly a headache, nausea, chest pain,” says Dr. Paul Hosek, medical director of the intensive care unit.

The workers were given oxygen and closely monitored by hospital staff.

Emergency teams were not called to Keybrand Foods at 1326 Victoria Street North until the staff arrived at the hospital.

Investigators say a problem with the ventilation system increased carbon monoxide levels in the facility.

“It was pretty clear that the damper had fallen off and all of those toxic gases had flowed back into the building,” said Doug Voisin, Kitchener Fire Platoon chief.

Forty employees who were still at the plant were called out.

The fill levels in the facility were measured ten times above industry standards.

“[Carbon monoxide] can be fatal within four hours, ”says Voisin.

The Department of Labor and officials from the Technical Standards & Safety Authority are assisting the investigation.

Voisin says the fire department will regularly run air quality tests at the plant to make sure this doesn’t happen again.