Haliburton County Huskies goalie Christian Cicigoi stares down a shot during second round of OJHL playoffs on Sunday, April 17 at the SG Nesbitt Memorial Arena in Minden. The Huskies lost 5-3 to the visitors. /DARREN LUM Staff

The Haliburton County Huskies found themselves in a similar position to their first round series against the Golden Hawks, as they dropped game one 5-3 to the Cobourg Cougars, Sunday, April 17 at the SG Nesbitt Memorial Arena.
Oliver Tarr got the game’s first goal with less than a minute remaining in the first period, sending the packed house into a frenzy. Taking a deficit into the dressing room, the Cougars mounted a charge in the second and third periods.
The second period saw a lot of back and forth action from both sides. The teams tossed around big hits like they were shots on net, and the extra-curricular post-whistle conduct picked up. The teams chipped and chirped at each other, but the Cougars would net the only goal of the game.
AJ Cook took advantage of a Sam Solarino penalty to tie the game 1-1, burying a centering pass over the shoulder of Cicigoi. The Huskies valiantly played out the rest of the period however, the Huskies were in for a world of pain in the third period.

In just over one minute, the Cougars scored three unanswered goals. Starting at 3:32, Devon Thibodeau beat a screened Cicigoi. Then, 43 seconds later, Zach Smith beat Cicigoi on an Adam Barone rebound. At 4:43, the Cougars added another with George Krotiris scoring on his own rebound, with a second effort.
The Huskies added two of their own as Patrick Saini buried a beautiful goal off a rebound from shot by Payton Schaly, while Schaly scored his own marker taking advantage of a rebound from a Isaac Sooklal shot. The Huskies pulled within one, but the Cougars got the last laugh. Team captain Tucker Firth managed to take advantage of his own rebound and score a nearly identical goal to that of Krotiris and Smith. 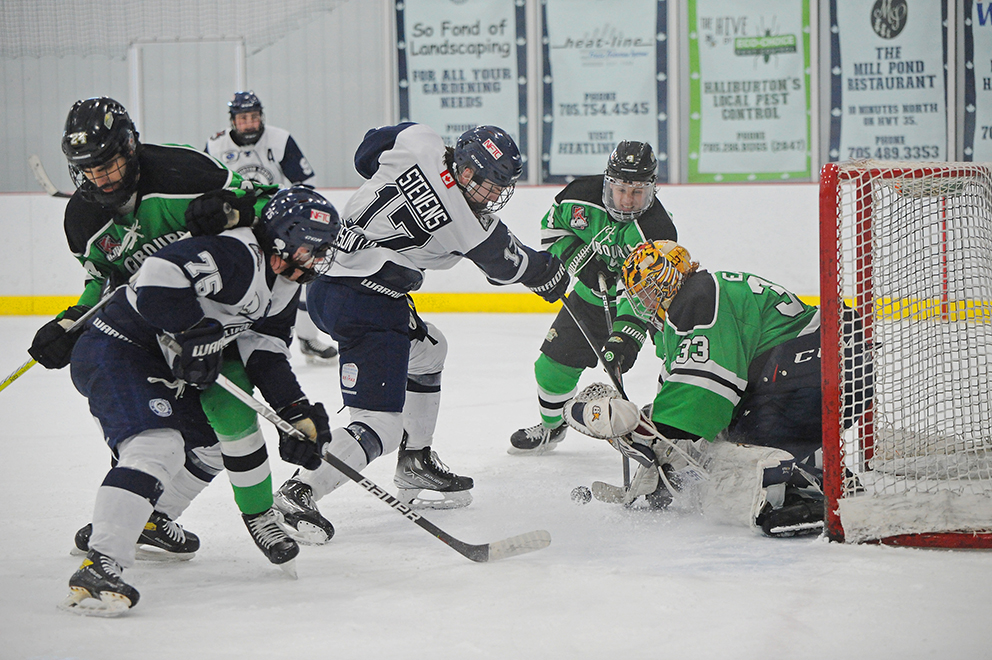 Haliburton County Huskies forwards Patrick Saini, and Christian Stevens look to score against Cobourg Cougars goalie Justin Easter in the last minute of the game during the second round of OJHL playoffs on Sunday, April 17 at the SG Nesbitt Memorial Arena in Minden. The Huskies lost 5-3 to the visitors. /DARREN LUM Staff

With the clock expiring, the Cougars claimed game one with a 5-3 win over the Huskies. The ramifications from the match will mean the game scheduled Monday, April 18 will be a do or die game for the Huskies. Since this story was published in the print edition of the Echo, the Huskies won 2-1, with an overtime goal by Sam Solarino.

Despite the playoff opener loss, the Huskies have a stellar record in Cobourg only having lost twice in the regular season. The Huskies host the Cougars tonight (April 20) in a winner take-all game at the SG Nesbitt Memorial Arena in Minden. Puck drops at 7 pm

18 businesses in Kitchener, Waterloo and Woolwich broken into overnight: police