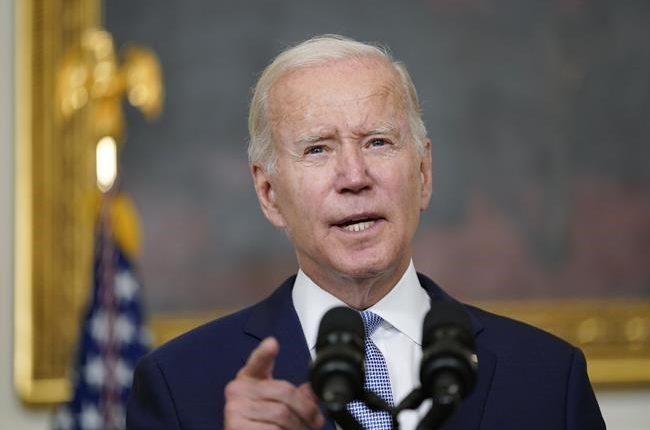 A deal on Capitol Hill that could cut prescription drug costs for millions of Medicare beneficiaries was cautiously cheered by older Americans and their advocates Thursday even as many worried it might never come to fruition.

A deal on Capitol Hill that could cut prescription drug costs for millions of Medicare beneficiaries was cautiously cheered by older Americans and their advocates Thursday even as many worried it might never come to fruition.

The health care and climate agreement struck by Senate Majority Leader Chuck Schumer and Democratic Sen. Joe Manchin includes landmark provisions that could help senior citizens, including a cap on out-of-pocket Medicare drug costs and a requirement that the government negotiate prices on some high cost drugs.

Some of the issues addressed in the deal have been talked about for decades and proved elusive. But Manchin’s backing brought new optimism to many who have lobbied and prayed for relief.

“We worry constantly, ‘Will we be able to afford this?'” said Becky Miller, a 67-year-old retired teacher from Bradenton, Florida, who spends thousands of dollars each year for drugs to treat epilepsy, heart problems and an inflammatory disease that affects her spine.

She is afraid the powerful pharmaceutical lobby might still thwart the plan, but said, “If this goes through, it will help a lot of people.”

Several prongs of the proposal have the potential to bring relief to millions of people:

— It would cap out-of-pocket drug costs at $2,000 a year for Medicare beneficiaries. No such limit exists today, and some older people on costly drugs can run up bills of tens of thousands of dollars.

— It would give Medicare, for the first time, the ability to negotiate directly with pharmaceutical companies over the price of drugs, though the number of medications subject to the provision would be limited.

— It would create a new “inflation rebate” requiring drug companies to give refunds to Medicare beneficiaries for increases in prescription drug prices that exceed the rate of inflation.

— It would provide coverage of vaccines for senior citizens. Some Medicare beneficiaries have had to pay out of pocket for recommended immunizations, such as the one against shingles.

Earlier proposals were more generous and, along the way, provisions to pay for senior citizens’ glasses, hearing aids and dental care were trimmed. But news of a possible deal still drew applause.

“This would nonetheless be transformational, just not as transformational,” said David Lipschutz, associate director of the nonpartisan Center for Medicare Advocacy. “It might not have been everything that everyone hoped for from the beginning, but this is nonetheless a huge step. ”

Tricia Neuman, a Medicare expert with the nonpartisan Kaiser Family Foundation, was likewise optimistic, saying, “Congress is on the cusp of making major changes to the Medicare drug benefit that could provide significant help to people struggling with their drug costs.”

If passed, an estimated 4.1 million Medicare beneficiaries would start getting free vaccines as soon as next year, Neuman said. Drug companies would also be required to start giving the rebates next year.

Other proposals would take longer to kick in. The cap on out-of-pocket spending — estimated to help 1.45 million people — would start in 2025. And in 2026, the government would be able to start negotiating prices, beginning with 10 drugs and increasing to 20 by 2029.

Medicare can’t currently negotiate drug prices with pharmaceutical companies, leaving taxpayers on the hook to pay for whatever the companies charged, said Bill Sweeney, a senior vice president at AARP.

“Why would we create a situation where we’re at the mercy of the drug companies to pay whatever they charge?” he asked.

The Senate is expected to vote on the wide-ranging measure next week, but with the chamber divided 50-50 and the Republicans staunchly opposed, the Democrats will have no votes to spare. A House vote would follow, perhaps later in August.

Pamela Stevens, a 69-year-old from San Dimas, California, pays around $10,000 annually in out-of-pocket expenses for drugs to treat diabetes and other conditions. She is a retired nurse and her husband a retired accountant, and said that while they aren’t poor, drug costs leave them little wiggle room. They never go out to eat or on vacation, and she sometimes goes without cholesterol drugs to cut costs.

Passage of the proposal, Stevens said, would give her some freedom and a chance to do more than just sit home watching TV. But she is not convinced it will happen.

“I’m not going to hold my breath,” she said. “My hopes have been dashed too many times.”

In Oakland, California, 67-year-old Gary Cohen will pay $14,000 this year out of pocket for a generic version of the cancer drug Revlimid. Cohen, who worked on the implementation of the Affordable Care Act in the Obama administration, was diagnosed with multiple myeloma in 2020.

“It’s scandalous to pay that much money for something that is literally keeping me alive,” Cohen said. The cap on out-of-pocket costs would help him once it kicks in.

He added: “I’m really excited it’s happening. I wish it were coming sooner.”