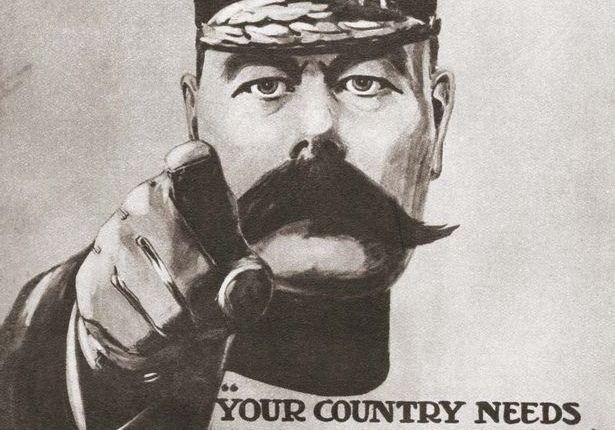 The iconic recruiting posters during World War I made him one of the most recognizable faces in British history.

Lord Kitchener’s mustached face and steely eyes stared down from every street corner and shop window, accompanied by the words, “Your country needs you.”

When he died suddenly and mysteriously tomorrow 100 years ago, almost 50 years later there were as many conspiracy theories as the murder of JFK.

Some claimed Kitchener was murdered by the government, killed in a conspiracy forged by Winston Churchill to make a fortune on the stock market … or he fled to Russia and became Joseph Stalin.

While the nation mourned – and gossiped about – a national hero, his family mourned 65-year-old Uncle Herbert.

His great-grandniece, Lady Emma Kitchener, married to Downton Abbey creator Julian Fellowes, says, “There have been many great conspiracies, but the family has always viewed it as a great personal loss and a great loss to the nation.

“My grandma and great-aunt both remembered seeing him before he left for Russia, and he invited them over for tea. He was a very loving and caring uncle. He was a really big part of her life.

A very experienced field marshal, Kitchener was appointed Secretary of War at the beginning of World War I and played a vital role in preparing Britain for the greatest conflict in its history.

But sent on a secret mission to Russia in 1916, his ship HMS Hampshire sank near Orkney on June 5th. On Sunday Emma and Julian will attend the inauguration of a new memorial wall on Orkney that bears the names of all 650 dead.

Lady Emma says, “It will be moving to look out over the sea and think about what happened and to wonder what would have happened if they had not died.”

Julian adds, “Kitchener used all of his experience to create an army that would win World War I. That is why it was called Kitchener’s Army.

“He was a godsend. Talk about comes the hour, comes the man. “

When World War I began, Kitchener was at the heart of British politics and the British Empire for 40 years.

At 24, he helped shape the future Middle East when he was sent to map the Holy Land. The point where his map ended eventually became the modern border between Israel and Lebanon.

At 33 he was captain of the British army, rose to major general in the last years of the 19th century and led the destruction of the dervish army that rose in Khartoum, Sudan.

And he cemented his unscrupulous reputation around the turn of the century in South Africa, where thousands of Boer families were sent to newly invented concentration camps.

Stations as military commander in India and Egypt strengthened Kitchener’s status as the emblem of the British Empire, and images of his huge mustache even appeared on cookie jars. Even Julian admits, “There are parts of Kitchener’s life that would make great drama.”

When World War I began in 1914, although he was not a politician, he was appointed Minister of War.

Kitchener was on the way to Russia with HMS Hampshire
(Image: Wikipedia)

By 1916, Kitchener had performed a minor miracle by keeping the British Army in full strength in the face of appalling casualty figures. The thousands of volunteers it attracted have been roughly referred to as the Kitchener’s mob.

But his position was undermined by the scandalous lack of grenades and he made enemies of several high-ranking politicians, including future Prime Minister David Lloyd George.

Kitchener once said, “The problem with politicians is that they are required to maintain secrecy, then go home and tell their wives everything. Except Lloyd George, who tells everyone else. “

When the Easter Rising in Ireland forced Lloyd George to retire from an important diplomatic mission in Russia, Kitchener took the chance to replace him.

He traveled to Scapa Flow in the Orkney Islands, where the British fleet was recovering from the bloody sea battle at Jutland, and went on board the HMS Hampshire.

But a violent storm forced the ship’s escorts to turn around, leaving it isolated and exposed.

On the evening of June 5th there was a huge explosion and the HMS Hampshire toppled Titanic style before sinking into 200 feet of water in just 20 minutes. Only a dozen men survived.

The former big game hunter claimed he had already tried to kill Kitchener in Johannesburg by infiltrating the army and leading a murder squad.

This time he said he pretended to be a Russian duke to board HMS Hampshire and signaled a German submarine to sink the ship before fleeing in a lifeboat. He claimed he had been awarded the Iron Cross and was photographed with the medal.

But history professor Brad Faught, who recently published Kitchener: Hero and Anti-Hero, is not convinced.

He says, “Duquesne seems to have been a serially opportunistic attention seeker.” Others believed that the Russian Communists had revealed the details of Kitchener’s secret mission to the Germans, as neither side wanted him to reinforce the Tsar’s army.

But some claimed that it was indeed the British who murdered their own Secretary of War because he had served his purpose in recruiting a new army and his political opponents wanted to get him out of the way. This theory was fueled by Orkney locals who claimed they were prevented from using their lifeboats.

Oscar Wilde’s ex-lover, Lord Alfred Douglas, even claimed Churchill was involved in a plot to assassinate Kitchener and portrayed Britain’s victory in Jutland as a defeat in order to undermine stock prices, which meant business partners buy cheap and sell at huge profits could.

Churchill persuaded Westminster to launch a defamation lawsuit to clear his name, and Douglas was jailed for six months.

Dr. Says Faught, “It was probably nothing more than a wild and bogus assault by celebrities to blame Churchill, but it was suggestive enough that it rocked the boat for a while.”

In 1926, journalist Frank Power claimed that a fisherman found Kitchener’s body stranded in Norway and brought a sealed coffin to the UK. It became felt that an investigation was needed – and the coffin was opened to reveal that it contained tar, which was used to mimic the weight of a corpse.

And there were more fancy theories. Kitchener was a Freemason and some said the secret society helped him start a new life.

As the Spiegel reported on Kitchener’s funeral

There were even claims that he had reached Russia and become Joseph Stalin, although this appeared to be largely due to their similar facial features.

Dr. Says Faught: “The conspiracy theories were, in part, the result of the shock the nation had felt and the secrecy of Kitchener’s mission and the remote place of his death.

“It was mostly about the inability to produce a corpse. They could never prove that he died.

“But in terms of how people die in war, it was pretty conventional. The battle for Jutland had just ended, so he sailed to a high risk area. One in particular, U-Boat 75, built a field of about 20 mines, and it appears that the Hampshire tripped the field. It was a complete maritime disaster, but a conspiracy seems unlikely. “