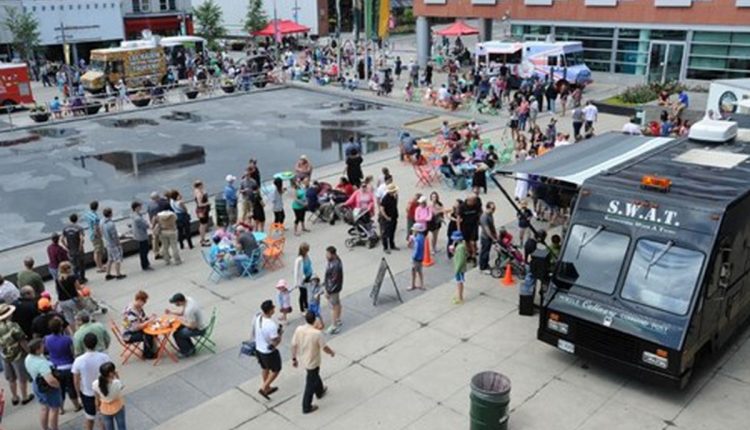 Thousands stood in line for more than 30 minutes to sample fast food in front of Kitchener’s City Hall at the city’s first Food Truck Mini-Festival on Sunday.

“We’ve heard good things about it in other cities,” said Kitchener’s Natalie Hayden, who was standing in line for a Mediterranean crpe from the Café du Monde truck.

She added that she would like to see more food trucks around town with varied menus.

“I’m on the road all the time … (the trucks) would be good,” agreed Lisa Neu from Ayr.

The festival, organized by the City of Kitchener, was planned after local residents requested a food truck event after seeing similar festivals in other communities in southern Ontario.

About six trucks were featured at the event and with the large lines and constant stream of customers flooding downtown, some ran out of groceries in the late afternoon.

Currently, due to regulations limiting food truck availability across the city, vendors can only be seen in Civic Square or at other festival events on select Thursdays during the summer.

Licensing and parking laws could change in the future as public support for food trucks grows.

“All we’ve done … is a pilot to see how the community thinks of them, if there’s enough interest, and to see if our local ecosystem would grow around it,” said Hilary Abel, Marketing Coordinator and programming in downtown the city.

“Our whole food truck program is about creating the vibrancy of downtown,” she said.

The initiative uses food trucks as a draw to bring residents downtown, and it also introduces people to existing stores on King Street that they might not otherwise have discovered, Abel said.

While waiting for more food truck-friendly statutes, sellers said the freedom and cost-effectiveness of a truck still made the option preferable to starting a standard restaurant.

“It’s a little less hectic than a whole restaurant,” said Sebastian Dragusanu of Kitchener, who owns Café du Monde with his wife Nadia.

“The food truck business has just gotten so mad, we made a good choice.”

Dragusanu said they usually open their truck in St. Jacob’s market twice a week and occasionally take it to events. With dozens of people lined up by his truck, Dragusanu said he didn’t expect such an incredible turnout.

“I think Kitchener needed something like this because it’s so fun,” he said.

Ski Resort Gets Ready for the Season While Waiting on the