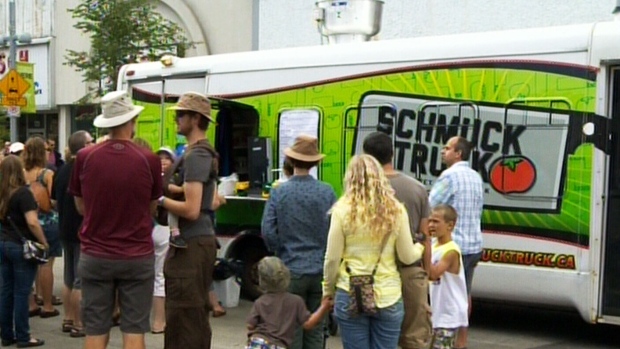 The warmer weather means you can see more food trucks on the city streets. However, truck operators say they still face a lot of red tape.

“There are still a few hurdles that we have to overcome in order to become more successful and give us more opportunities to operate in the Kitchener-Waterloo area,” says Brad Schmuck, owner of the gourmet food truck Schmuck Truck.

In the city of Kitchener, only two food trucks are allowed to drive simultaneously between 11 a.m. and 3 p.m. in the city center on Joseph and Gaukel Street on Wednesdays and Fridays. By dividing this area into around 16 trucks that are in use in the region, each truck only gets around one lunch per month.

“It’s pretty difficult for us to work in one place one day a month … We want to be down there, feed the people who work down there, and just have the opportunity to operate down there,” said Schmuck.

Sandor Dosman runs the gourmet grill cheese truck Fo Cheezy and helps to create the timetable for the food trucks at the Joseph and Gaukel site. He says having only two days is not enough.

“We want to be where the people are, so we’d like to see a few more places downtown where we can park regularly,” he continued.

This is the situation in Waterloo, where the city has provided locations in the uptown core where trucks can be parked seven days a week on a first-come-first-serve basis.

Kitchener Mayor Berry Vrbanovic says food trucks are an important part of the downtown plan and the statutes are changing.

“We will experience a time when food trucks are just as much a part of our downtown scene as stationary restaurants. But during this construction phase, especially over the next two years, we want to ensure that the roll-out is gradual so that we may not endanger existing companies, ”said Vrbanovic.

The mayor also said food trucks are allowed to be used in other locations around the city, such as at various festivals and city parks, or when invited by a company to provide food to employees.

Ski Resort Gets Ready for the Season While Waiting on the