The achievements of Aldwyn “Kitchener” Roberts are many and widely known. Even as generations pass, many know the name Kitchener is of extreme importance to this country’s cultural identity and space. Given this, his son Kernal Roberts is calling for his father to be awarded the country’s highest honour: the Order of the Republic of Trinidad and Tobago (ORTT).

Kitchener was awarded the Hummingbird Medal Silver in 1969. In 1994, he refused the Chaconia Gold Medal then stating that the people wished for him to receive the then Trinity Cross which was the country’s highest honour. Verification checks at The National Library and Information System of Trinidad and Tobago’s (Nalis) Heritage Library showed newspaper articles dated between 1993 and 1996 which called for Kitchener to be given the Trinity Cross.

In a Trinidad Guardian article dated August 26, 1996 the late Kitchener was quoted as saying that he would not settle for anything less than the Trinity Cross which was then the country’s highest award. He was also then quoted as saying he had already refused the second highest award, the Humming Bird Gold.

In a Trinidad Express article dated May 29, 1993 the National Action Cultural Committee (NACC) then called for Kitchener to be given the Trinity Cross. NACC then nominated Kitchener for the award. 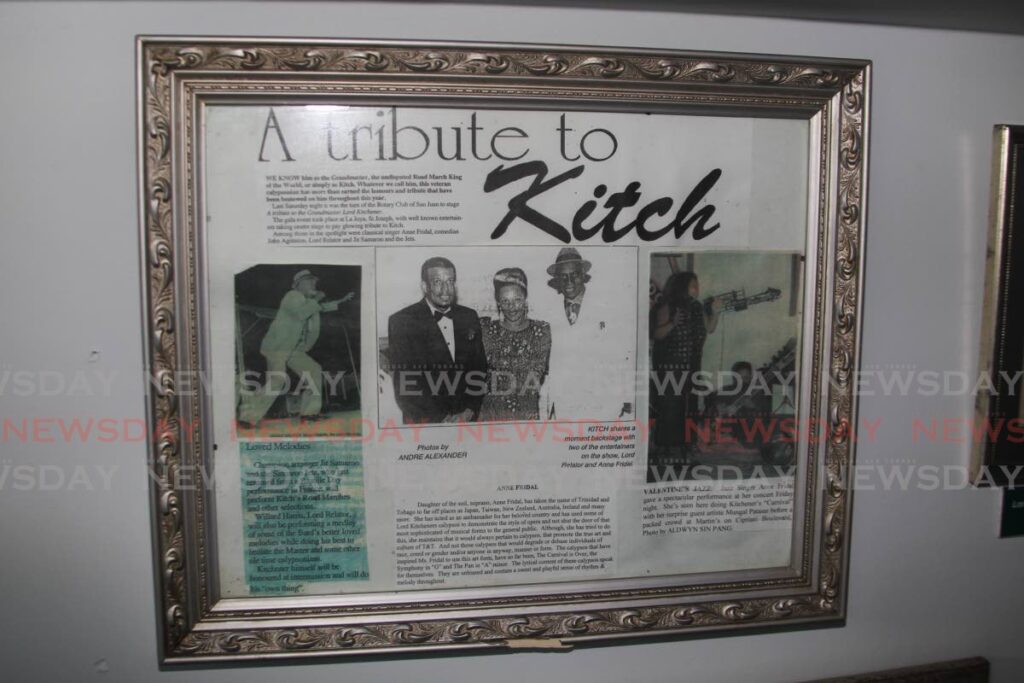 The Arima Rebranding Team along with Roberts will celebrate what would have been Kitchener’s 100th birthday with two concerts: one in Arima and the other at the Southern Academy for the Performing Arts. Photo by Roger Jacob

Come April 18, the “Grandmaster” would have been 100 and in honor of that some have called for the country to posthumously award Kitchener the ORTT.

To these calls, Roberts said he wanted his father to be awarded the ORTT.

“He knew his value and knew what he did for calypso and steelpan and all of that. Putting TT on the map locally, regionally, internationally.”

But Kitchener’s legacy and work are going to be honored on the anniversary of his birth on April 18. Kitchener was born on April 18, 1922 and died on February 11, 2000.

To honor his life, legacy and works, Roberts along with the Arima Rebranding Team (ART) led by Henry Saunders will host two shows: one in Arima (Kitchener’s birthplace) and the other at the Southern Academy for the Performing Arts (SAPA), San Fernando.

There isn’t going to be a show in Port of Spain as funding and sponsorship did not allow for it. Roberts said there was assistance from the mayor to host the shows in south. 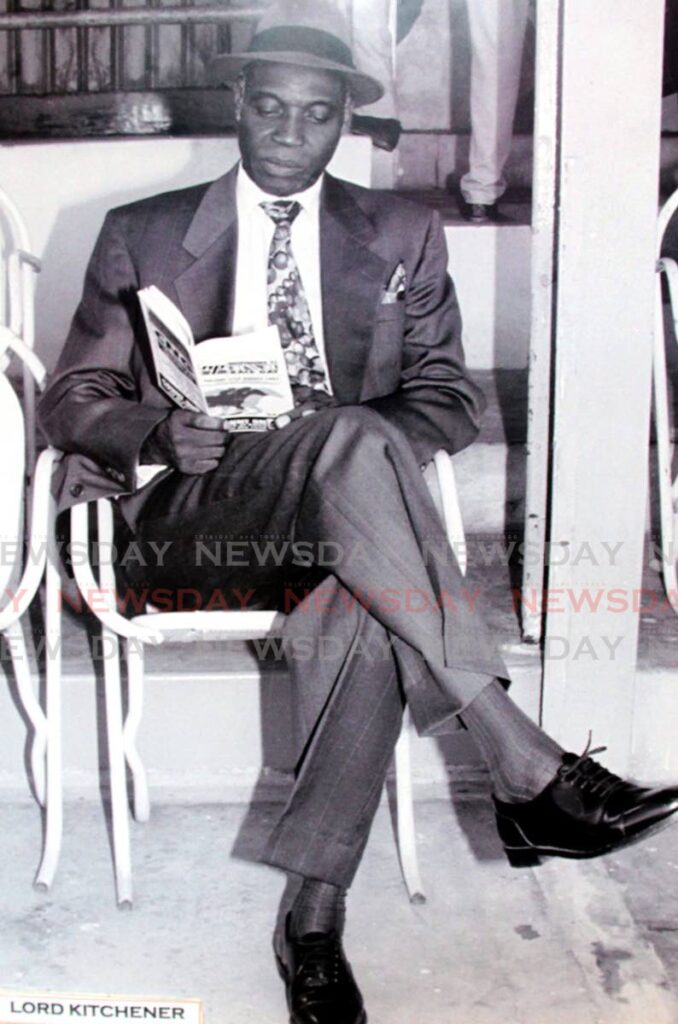 A photo of Lord Kitchener reading at the races on display at the exhibition, 100 years of Kitch at the National Library. Photo by Ayanna Kinsale

In an interview at RainoRama Palace, Diego Martin, Roberts said the concert at SAPA is going to be from 7pm-11.30pm on April 16.

The other concert will take place on Kitchener’s birthday at the Arima Angel Harps’ Steel Orchestra’s panyard, Arima, from 4 pm-12 am.

Roberts added that a beautiful cast is lined up including a lot of Kitchener’s peers “singing his songs.” Roberts, Crazy, Suagr Aloes and Baron are among the many performers.

There is also going to be church service in his honor at Church of God Ministries, Malabar, he said.

He added that the Arima mayor Cagney Casimire is deeply involved and the ART. The ART was “tooth and nail” behind the centennial celebration since 2020.

“We had like a whole extra year in advance to plan,” he said.

He said a great degree of planning, dedication and passion has been put into the organization of the events surrounding Kitchener’s birthday.

“I want to say hats off to the Arima Rebranding Team for their love and dedication and just the whole drive. The whole engine that they put behind the celebrations. It was amazing.”

While he praised ART, Roberts said the Government made little effort to assist with the celebrations.

“That is one thing with culture in TT. The Government does not really support,” he said.

Roberts said ART approached the Government for sponsorship of the events but did not receive any.

“Up to now, we have not received any sort of sponsorship from the Government toward the events or anything at all. The mayor is trying to rename Queen Street in Arima after him, which will be a very fitting tribute. But that is in the process and in the pipeline and there are steps to go through for that to actually take place…”

He said that the street renaming was suggested by the ART but Casimire was in agreement.

Soca Awards Organization’s CEO Colin Jackman also came on board at the tail end of the event’s marketing and is doing a good job, Roberts said.

He called on the Government to do better in honoring its icons and showing support.

“And not just always sidestep it and push it under a rug. I mean it is months we asking for help…”

He said in National Academy for the Performing Arts (NAPA) where the main auditorium is named after Kitchener, there is supposed to be an achievements wall.

“When you walk in there, the Lord Kitchener Auditorium, when foreigners come, who ever go in there and who is not aware, educated about or have knowledge of Lord Kitchener, will be educated on sight on entering his auditorium.”

Roberts said while the auditorium was named in his honor there was nothing further which spoke to Kitchener’s many accomplishments. Newsday called NAPA representatives to verify if there isn’t an achievement wall at the auditorium but was unable to get any info.

This was one of the things he wanted to see done.

Roberts said despite these issues he was really happy to see how the public has cherished Kitchener’s memory and was happy for the celebrations honoring him.

“Because a legacy so rich that Kitchener left behind comes once in a lifetime, second to none. The music he left us with will never die,” he said.

He added that paying tribute at the 100 years was very fitting. 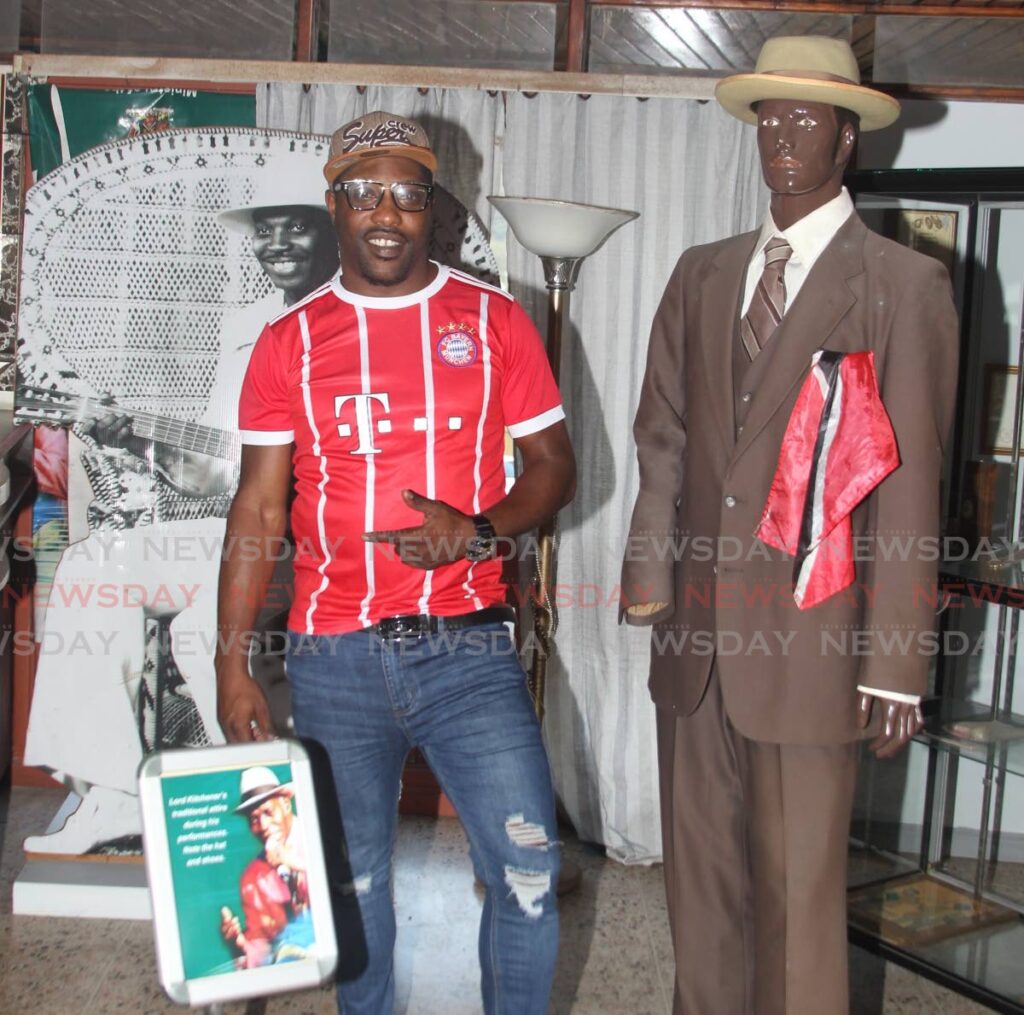 Kernal Roberts stands next to a mannequin wearing one of his father’s suits. He believes that his father should be given the Order of the Republic of Trinidad and Tobago.
Photo by Roger Jacob

There are also other plans in the making to document Kitchener’s life and works.

He said there is a book coming out spearheaded by the ART and a documentary-type movie about Kitchener’s life.

He could not disclose who, for contractual reasons, but said it is a big UK producer and it is going to be streamed on Netflix.

This is going to help educate and bring awareness to the man that Lord Kitchener was, he added.

The documentary will tell of Kitchener’s childhood, his start in calypso, his journey into Port of Spain, to the UK and back to TT.

“I’m really excited about this project.”

Roberts said he misses his father everyday but hearing his music heals the wound. He wants TT to always remember the music he left and the happy times he shared with the country.