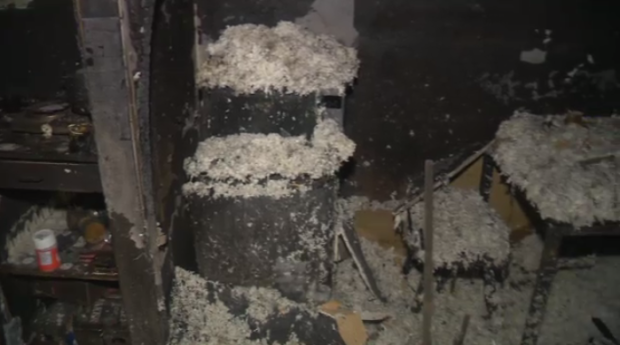 “I lost everything”: Inside the charred apartment where downtown Kitchener fire started

The day after a fire evacuated several buildings in downtown Kitchener, firefighters went back to the apartment to assess the damage.

Everything in the unit at 37 King Street West is now a blackened mess.

“It would have looked a lot worse before the ceiling was removed before the walls were torn down,” says Kitchener Fire Platoon Chief Doug Voisin.

Robert Kowalk lived in the unit. He went out with his dog to get food for breakfast and when he returned he saw the smoke and the flames.

“I’ve lost everything,” he says.

With a main door left open, the flames spread quickly.

Apartments and neighboring businesses have been evacuated.

Two people rescued by the fire escape were taken to Grand River Hospital, where they were treated for smoke inhalation.

The Red Cross was called to help sixteen people displaced by the fire. “We supported six of them directly,” says Christopher Allsop, Disaster Management Coordinator. “That was in the form of accommodation, clothing, food and transportation.”

Six of them were scheduled to return to 37 King West on Saturday.

Companies from the city center are also doing their part to help the victims.

The Berlin restaurant next door says it will donate $ 5 to victims of every main course bought on Saturday and Sunday brunch. Across the street, TheMuseum will raise and raise funds up to $ 500.

The shops in the basement did not suffer any significant damage.

Voisin says the damage is devastating but is a good reminder of how quickly a fire can spread and why it’s important to keep doors closed.

With reporting by Abigail Bimman

‘Have that safety net’: Experts weigh in on alternative real estate…