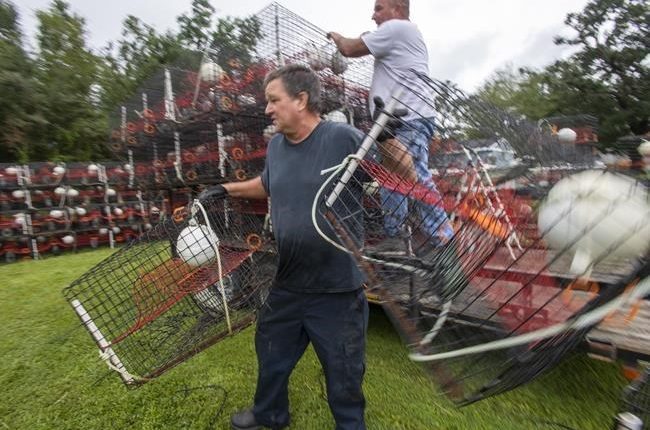 NEW ORLEANS (AP) – Hurricane Ida hit Cuba on Friday and threatened to hit Louisiana with devastating force over the weekend, resulting in evacuations in New Orleans and across the coastal region.

NEW ORLEANS (AP) – Hurricane Ida hit Cuba on Friday and threatened to hit Louisiana with devastating force over the weekend, resulting in evacuations in New Orleans and across the coastal region.

Ida rapidly intensified from a tropical storm to a hurricane with peak winds of 128 km / h on Friday as it crossed western Cuba and entered the Gulf of Mexico. The National Hurricane Center forecast that Ida would intensify into an extremely dangerous Category 4 hurricane with peak winds of 140 mph (225 km / h) before hitting land along the U.S. Gulf Coast late Sunday.

“This will be a life-changing storm for those who are not prepared,” said National Weather Service meteorologist Benjamin Schott during a news conference Friday with Louisiana Governor John Bel Edwards.

The governor urged residents to prepare quickly, saying, “You have to be where you want to be to weather the storm by tomorrow night at nightfall.”

New Orleans Mayor LaToya Cantrell ordered mandatory evacuation for a small portion of the city outside the levee system. But since the storm intensified so quickly in a short time, this is not possible for the whole city, she said. This usually requires using all of the lanes on some freeways to get out of town.

“The city cannot order a mandatory evacuation because we don’t have time,” Cantrell said.

City officials said residents needed to be prepared for extended blackouts and asked elderly residents to consider evacuation. Collin Arnold, the city’s head of emergency management, said the city could be under high winds for about ten hours.

Other areas in the coastal region have been the subject of a mix of voluntary and compulsory evacuations. The storm is expected to hit land on the exact date that Hurricane Katrina devastated much of the Gulf Coast, exactly 16 years earlier. Captain Ross Eichorn, a coastal fishing guide about 112 kilometers southwest of New Orleans, said he feared warm Gulf waters would “make a monster” of Ida.

“If you hit the bull’s eye, you don’t know what’s left – if anything,” said Eichorn. He added, “Anyone who isn’t worried has done something wrong.”

A hurricane warning has been issued for most of the Louisiana coast from Intracoastal City to the mouth of the Pearl River. A tropical storm warning has been extended to the Mississippi-Alabama line.

Officials voted against evacuating New Orleans hospitals. There is little room elsewhere for their patients as hospitals from Texas to Florida are already hit by a surge in coronavirus patients, said Dr. Jennifer Avengo, the city’s health director.

In the state’s largest hospital system, the Ochsner Health System, officials ordered fuel, groceries, medication, and other supplies worth 10 days and signed replacement fuel contracts for its generators. On the positive side, the number of COVID-19 patients had dropped from 988 to 836 in the past week – a 15% decrease.

Ida first met on Cuba’s southern island of youth on Friday afternoon. The Cuban government issued a hurricane warning for its westernmost provinces, where forecasters said up to 50 centimeters of rain could fall in places, potentially triggering deadly flash floods and mudslides.

Ivonne Deulofeu, who lives in the western town of Vinales, said the strong wind lasted for hours on Friday.

“We were really upset. It was really scary, ”said Deulofeu. “We had to nail the doors to the room … The plants, they’re all gone.”

Colonel Noel Lozano of the Cuban Civil Defense said over 10,000 people were evacuated in Pinar del Rio province, most to stay with relatives. There were no immediate reports of deaths.

Late on Friday evening, the storm was 105 miles (165 kilometers) west of Havana and moving northwest at 15 mph.

An even greater danger will then begin over the Gulf, where predictions were aimed at Ida rapidly intensifying into a major hurricane before making landfall in the Mississippi Delta late Sunday, the hurricane center said.

If that prediction is correct, Ida would live to be 16 to the day when Hurricane Katrina was a Category 3 storm with winds of 125 mph (201 km / h) near the Buras River Community, directly down the Mississippi River from New Orleans , hit land.

Katrina is believed to be responsible for an estimated 1,800 deaths from the central Louisiana coast to the Mississippi-Alabama border. A tremendous storm surge combed the coasts and wiped houses off the map. In New Orleans, federal levee failures resulted in catastrophic flooding. Water covered 80% of the city and many houses were flooded except for the roofs. Some victims drowned in their attics. The Superdome and the New Orleans Convention Center became scenes of red-hot misery when tens of thousands were stranded with no electricity or running water.

The memories of Katrina still haunt many who went in search of Ida on Friday and stood in line for groceries, gasoline and ice cream, as well as sandbags for the town.

There was traffic at the entrances to a Costco in New Orleans, with dozens of cars at the pumps and shoppers rolling out carts with boxes of water bottles and other essentials.

Retired policeman Wondell Smith, who was working in the police force when Katrina met, said he and his family planned to stay but were also preparing to travel further inland should the forecast deteriorate. He loaded water, bread and sandwich meat into his SUV.

“I know what that looks like,” said Smith, referring to the possible devastation. “This is the first time I’ve been home in 34 years of service,” he added. “And I want to be prepared.”

The preseason NFL game between the Arizona Cardinals and the Saints at the Superdome on Saturday was initially postponed for seven hours to avoid the weather and then canceled altogether.

The hurricane center predicted the peak storm surge along the Louisiana coast could reach 10 to 15 feet (3 to 4.5 meters), with a possible wave of 7 to 11 feet (2.1 to 3.4 meters) in the area of New Orleans. The storm’s trail brought New Orleans to the east side – often referred to as the dirty side – which generally has a much stronger impact than the west side.

“Being east of this storm’s trail isn’t ideal,” Arnold said.

This story has been updated to correct the Louisiana Governor’s name. It’s John Bel Edwards, not John Bell Edwards.

Manufacturing and its Impact on Ontario’s Economy