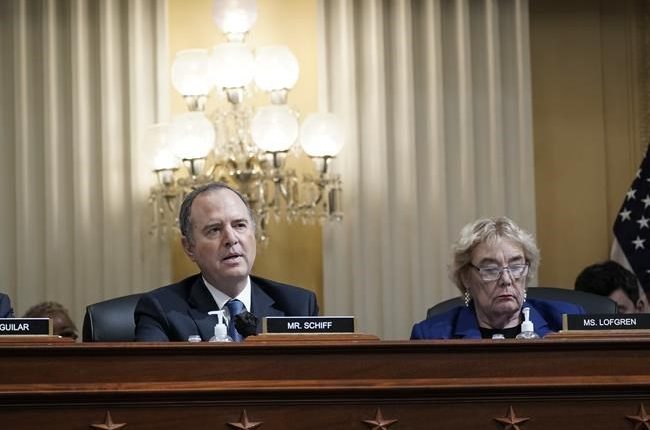 Jan. 6 takeaways: Ahead of election, warnings on democracy

WASHINGTON (AP) — The House Jan. 6 committee is issuing a stark warning in its final public hearing before the midterm election: The future of the nation’s democracy is at stake.

WASHINGTON (AP) — The House Jan. 6 committee is issuing a stark warning in its final public hearing before the midterm election: The future of the nation’s democracy is at stake.

The panel returned Thursday for an October hearing, weeks ahead of the election, with new details about President Donald Trump’s state of mind on Jan. 6, 2021 as he egged on his supporters with false claims of election fraud, pushed to accompany them to the Capitol while lawmakers were counting the votes and then did nothing for hours as they violently broke into the building.

Similar to its eight hearings over the summer, lawmakers on the panel focused on Trump and his efforts to disrupt the country’s long tradition of peaceful transfers of power. The panel was expected to subpoena the former president at the end of the hearing, according to two people familiar with the investigation and granted anonymity to discuss it.

The committee is set to shut down at the beginning of next year, and is making its final public arguments ahead of a report expected in December.

The former president “continued to pull out all the stops” even after losing in court and the Electoral College, said Mississippi Rep. Bennie Thompson, the panel’s chairman.

‘CONSIDER WHETHER WE CAN SURVIVE’

The lesson of the committee’s investigation is that institutions only hold when people of good faith protect them without regard to political cost, said Wyoming Rep. Liz Cheney, the panel’s Republican vice chairwoman.

The warnings come as Trump is still refusing to acknowledge that he lost his reelection to Joe Biden and is considering another run in 2024 – and as many Republicans who deny Biden’s win are running in the midterm elections at all levels of government. Many states have replaced election officials who resisted Trump’s pressure campaign.

“Any future president inclined to attempt what Donald Trump did in 2020 has now learned not to install people who could stand in the way,” said Cheney, who lost her own Republican primary this August. “Consider whether we can survive for another 246 years.”

The committee has obtained more than 1.5 million pages of documents from the Secret Service in recent weeks. Lawmakers are revealing some of that information in the hearing, including an email from within the agency on Dec. 11, 2020, the day the Supreme Court rejected one of his attempts to undermine the vote.

Other emails showed that the agency had ample warnings of violence in the weeks and days ahead of the insurrection.

An alert received by the agency on Dec. 24 said that multiple online users were targeting members of Congress and “instructing others to march into the chambers,” said California Rep. Adam Schiff, a Democratic member of the panel.

The committee showed prerecorded interviews with Cabinet members including former Secretary of State Mike Pompeo, Attorney General William Barr and Labor Secretary Eugene Scalia who said that they believed that once the legal avenues had been exhausted, then that should have been the end of Trump’s to remain into power.

Pompeo, who was interviewed by the panel since its last hearing in July, said in his videotaped testimony that he believed that once the Electoral College certified the vote, that was the end of the process for contesting the election. “We should all comply with the law at all times, to the best of our ability — every one of us,” Pompeo said.

At the same time, Trump continued to push the false claims of fraud to his millions of supporters.

“President Trump knew the truth. He heard what all his experts and senior staff was telling him,” said Illinois Rep. Adam Kinzinger, the committee’s other Republican. “His intent was plain: ignore the rule of law and stay in power.”

Cheney addressed one of the committee’s remaining questions at the beginning of the meeting, saying that the panel “may ultimately decide to make a series of criminal referrals to the Department of Justice.”

Members of the panel have long suggested they may suggest charges for Trump or others based on their own evidence. While such a referral would not force any action, it would place political pressure on Garland as the department has pursued its own investigations surrounding Jan. 6. And the committee has yet to share any transcripts from its more than 1,000 interviews.

Still, “we recognize that our role is not to make decisions regarding prosecution,” Cheney said.

Latest food delivery marketplace is the ‘new kid on the block’