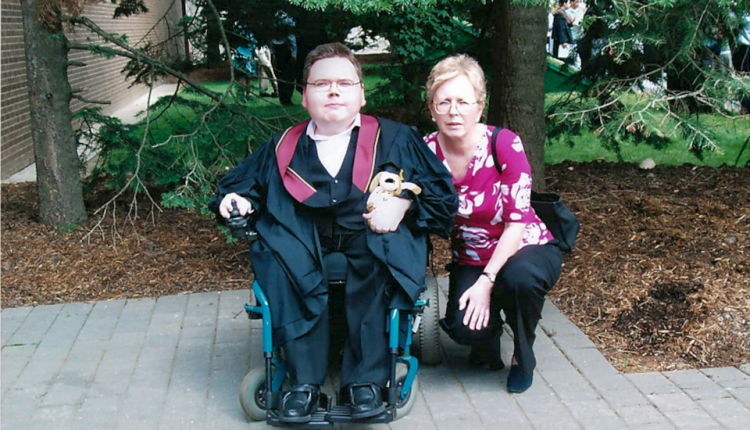 One Kitchener local has turned to his community for support after his mom and long-term caregiver was diagnosed with cancer and moved into palliative care.

Michal Kaliszan has Spinal Muscular Atrophy, a physical disability that causes progressive muscle weakness. While doctors predicted that he would die in his early teens, he’s still alive thanks to the “endless sacrifices” his parents made. Without help, the government will likely put him in long-term care, which the 39-year-old likened to “a death sentence.”

“I’m encouraged by the (money) raised so far…every little bit helps,” said Kaliszan. “It’s the only way that I can help my mom find peace as she’s more worried about me than her own death.”

A factory worker and customer service representative at a local knitting shop, Kaliszan’s parents are Polish immigrants that started a business together. However, it closed shortly after Kaliszan’s father died from colon cancer in 2002.

Kaliszan says the challenge with long-term care is that it’s “the de facto” solution. In his mind, being placed in long-term care would waste his parent’s efforts to build Kaliszan almost 40 years of something close to a normal life.

“The doctors are saying you know, time is running short (for my mom) so I am effectively stuck,” said Kaliszan, who’s been looking for solutions for months. “Unfortunately, there is a very, very big gap in the kinds of support available for people with physical disabilities that need 24/7 care.”

So far, the fundraiser has gathered almost $2,500 of its $300,000 goal, which covers about one year of care for Kaliszan. A full-time software developer in addition to his disability, Kaliszan is hoping to stretch the money for as long as possible. While he’s fundraising for the cheapest alternative, some in-home care options cost up to 40 to 60 dollars per hour.

“For me, it’s not easy to be going to (the public) to ask for these funds, but it’s something I’m willing to do to give my mother some peace of mind,” said Kaliszan. “But when I knock on various doors, a lot of them close, simply because my disability is physical.”

Ontario’s Progressive Conservative government passed legislation Wednesday that would force hospital patients awaiting long-term care into random nursing homes on a temporary basis. Patients who refuse to move to long-term care will be charged a fee, although it’s unclear how much.

“Every health care provider, doctor, nurse I talk to you says ‘that’s basically your only choice,’ and ‘you have to accept that your lifestyle is going to change,’” said Kaliszan. “I’ll be lucky if I can get at least two hours of care per day and that’s not even talking about the social implications and living conditions…we’re talking about waiting in a soiled diaper all day long until someone is available.”

One option Kaliszan explored was March of Dime’s Jason’s House. Offering long-term care to four high-needs people in a residential home, the organization only houses those with similar abilities (with the idea they can assist one another) and applicants must provide their own homes. While Kaliszan doesn’t object to opening his doors, his house can’t hold four special needs people and his disability isn’t eligible.

“For example, if I had a roommate that’s paralyzed from the waist down- that would be a big help because they can literally open the door,” said Kaliszan. “As opposed to getting people in the same state who lack those complementary skills and abilities.”

Kaliszan’s GoFundMe can be found here. He also has a website.