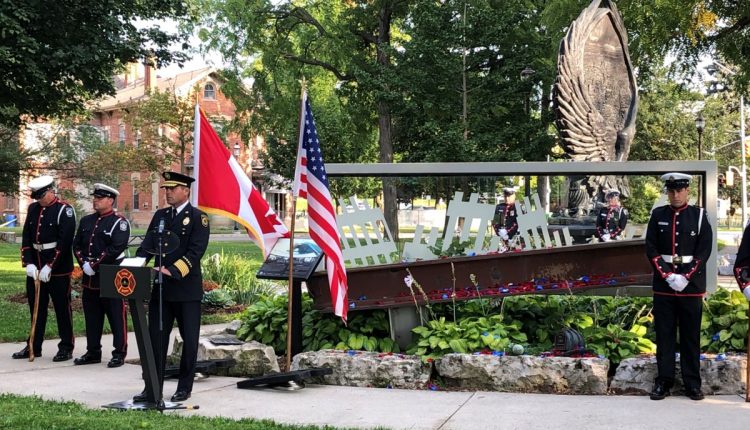 Members of Kitchener City Council, the Fire Department and the community gathered this morning at the Memorial to Fallen Firefighters in Civic Park to remember “the worst, and most importantly, the best of this tragic event.”

On that terrible day, the world witnessed the senseless deaths of 2,977 people, countless others who suffered serious injuries and long-term health problems, and thousands of family members and friends of the victims who were forever affected. That’s 2977 people – mothers, fathers, brothers, sisters, grandparents, children, friends – people who woke up that morning, left their homes and loved ones without realizing that they would never see each other again. Among those who perished, 24 of our Canadian compatriots lost their lives in the heinous acts of that day.

While the evil and tragedies of September 11th will forever be entrenched in our minds, let us also pause to remember some of the best human souls and the immense love and kindness we experienced in the hours and days after September 11th. September experienced.

In our break today, let’s also honor the 343 New York firefighters, 23 New York Police Department officers, 37 New York and New Jersey Port Authority officers, and 8 rescue workers who selflessly gave their lives in the public service for others as first responders on these Tragedies.

Recall the indelible bond between Canada and the United States that was formed in the hours and days after the 11th, the role of local companies like BlackBerry in helping communications in the aftermath of the attacks, and the dedication of some of our members own Kitchener Fire Department, who traveled to New York City in the following days to support the reconstruction efforts.

This morning, members of Kitchener City Council, the Kitchener Fire Department, and our community gathered at the Memorial to Fallen Firefighters in Kitchener’s Civic Park to pause and remember the worst, and most importantly, the best of this tragic event. We gathered around the steel beam of the World Trade Center, which reminds us of the connection between our two communities and the common humanity we all share. And today we should all stop and reflect on the words of former President Barack Obama: “Even the smallest act of service, the simplest act of kindness is a way to honor those we have lost, a way, this spirit of unity that followed September 11th. ”Today and every day let us always honor the memory of this date and the many lost and influenced lives, not with hatred or anger, but with love, service to others and kindness.

This morning I had the privilege of reading the attached 20th statement: https://t.co/PPcD1Q3RHf pic.twitter.com/BRKyzjEjLP

Five new books leave you with something to chew on