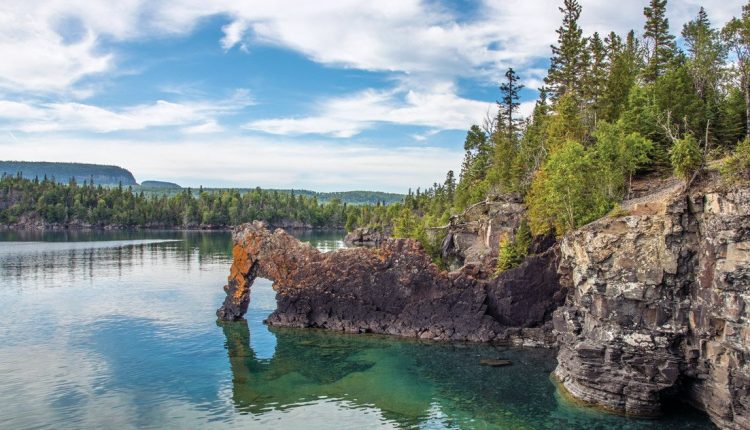 Life on Lake Superior’s Ontario Shore in 1867, When Canada Was Born

When Canada first came into being as a country on July 1, 1867, it was a muted affair with no parades and few parties or fanfares.

Even the Minneapolis Daily Tribune noticed the calm mood of the new country and reported on July 7, 1867: “The inauguration day for the new Dominion of Canada was very calm in Ottawa. People didn’t seem to care. ”Two days later, the paper wrote,“ They expected people to throw up their hats and express boundless enthusiasm, but people did nothing of the sort. It was a very cool affair. “

Fast forward to 2017 and it’s a whole different story. Canadians are excited, pumped up and ready to celebrate their 150th anniversary. Across Canada, many Canada 150 Legacy Projects are underway, special events are planned, and a great pride to say, “I’m a Canadian!”

Although today’s Canada has 10 provinces and three territories, 150 years ago there were only three British colonies in North America – the Province of Canada (which was divided into Ontario and Quebec by the Confederation), Nova Scotia and New Brunswick – that became four provinces, who made up the Dominion of Canada.

They created a country the “Canadian” way: no revolution, no battles, not even a nationalist movement. Instead, there were negotiations and three conferences – Charlottetown in 1864, Quebec in 1864, and London, England in 1866 – where Canada’s 36 “Confederation Fathers” and British leaders negotiated an agreement that became the British North American Act of 1867 , who declared July 1st “Dominion Day” and the birth of a new country, Canada. It was approved by the British Parliament and given royal approval by Queen Victoria.

What fueled nation building? In addition to economic factors and the need for political restructuring, there were concerns about US influence and possible annexation by that country (it had just bought Alaska from Russia for $ 7.2 million). There was also a belief that Britain was losing interest in its North American colonies and might no longer defend them. The London Times of England reported on April 2, 1867 that “the United States’ drive to absorb all of North America is no secret.” The Canadian Union would give strength to the colonies through unity and perhaps a way to become a sea-to-sea country.

Ontario and Lake Superior in 1867

Travel in what is now Thunder Bay was limited to paddling on the waterways or riding a steamboat. There were no major east-west roads or railroads – the first rail service came in 1882. The area was still a wild hinterland with fur trading posts, missions, and surrounding small settlements, including the Hudson’s Bay Company’s Fort William post on the Kaministiquia River, and a few European families in the later pioneering town of Fort William. On the river, two Jesuit priests founded the Mission of the Immaculate Conception in 1849, which is located in the village of Ojibwe, which is now part of Fort William First Nation.

Three miles to the northeast was the depot (also known as the station) that would later become Port Arthur. This was the landing place for the unloading of the anchored steamers, whose passengers, animals and cargo were brought by barge. In 1868 the only building was a log cabin built by the government. There was no logging, sawmills or agriculture. But the silver mining boom picked up pace and gained momentum with the opening of several mines, including the Silver Islet Mine, which stretched from 1868 to 1884 and for a time became the richest silver mine in the world.

Port Arthur originated from Prince Arthur’s Landing, which got its name in the spring of 1870 when it was still a tent community of miners known as The Landing. Colonel Garnet Wolseley’s Red River Expedition – sent west from Toronto to confront Métis forces during the Riel Rebellion – camped there. The British officer renamed the site North of Superior: An Illustrated History of Northwestern Ontario by Michel S. Beaulieu and Chris Southcott after the British Prince.

To the east, Nipigon was home to the HBC Red Rock House fur trading post and a leading North American fishing spot for the wealthy. One writer recalled that half barrels were filled with 800 pounds of trout when he was fishing the nipigon in 1867.

Michipicoten, the headquarters of the Lake Superior Commercial District of HBC, is 483 kilometers east of Fort William. At the confluence of the Magpie and Michipicoten Rivers, it had a postal service and was the center of the fur trade and almost everything else, says Johanna Rowe, a local historian in Wawa.

About 10 Europeans and 40 to 60 First Nations lived here in the late 1860s, working for the Michipicoten Post through trapping, trading, and hunting. However, HBC also branched out into boat building and commercial fishing, sending its fish (whitefish and lake trout) south to Sault Ste. Marie and then on to other cities like Detroit.

Some in Michipicoten worked in the blacksmith and plumbing trade. And although mining only prevailed here on the mainland in 1898, copper mining began on the island of Michipicoten in 1867.

Sault St. Marie, about 225 kilometers south of Michipicoten, had about 800 inhabitants. Most of them were logging, fishing, hunting or farming, says Michael Gingras of Sault Ste. Marie Museum. Others worked in the fur trade. Painter FJ Falkner arrived four years earlier and remarked, “When I met Sault Ste. Marie, I thought: I’ve never seen such a beautiful place in my entire life. When I came here, there was no Queen Street, just a road that partly runs through the forest. ”(Today Queen Street is a main artery.)

The community had telegraph and postal services. His “freeway” was the St. Marys River, which was traveled by canoe or rowboat. Steamships would soon be the new means of transport for people and parcels.

The Hudson’s Bay Company had recently given up. It was built by the North West Company and came under the control of HBC after the merger of the fur trade in 1821. The NWC had also built a small wooden lock on the river in 1798, but it was destroyed by the Americans in 1814. A new lock would be completed in 1898 (long after the first Soo lock on Michigan side opened in 1855).

Sault St. Marie officially became a village with 880 inhabitants in 1871 – with 290 French, 178 English, the rest with different ancestors and First Nations. It would be another decade before trains rolled into town.

In 1867, most of what is now Canada wasn’t even part of the Confederation – it was controlled by either the Hudson’s Bay Company (Rupert’s Land) or Great Britain (North-Western Territory and the Colonies of British Columbia, Prince Edward Island) and Newfoundland ). A year later, in 1868, HBC surrendered its vast land rights to Great Britain. Britain then transferred all of its North American lands to Canada in 1869, but did not acquire ownership until 1870 when Canada paid HBC $ 1.5 million. It was the largest real estate deal in Canadian history.

Three provinces quickly joined Canada: Manitoba in 1870, British Columbia in 1871 and Prince Edward Island in 1873. Alberta and Saskatchewan followed in 1905 and Newfoundland in 1949 (divided into Newfoundland and Labrador in 2001). Extensive areas were added – Northwest 1870, Yukon 1898 and Nunavut 1999.

It’s been a long road to present-day Canada and the country is ready to celebrate.

The Canada 150 Mosaic is already in preparation for the 200th anniversary. Sault St. Marie joined 150 parishes on the project to create a coast-to-coast mosaic of 80,000 1-inch tiles for an “overall picture of railroad cars connecting Canada.” Thunder Bay participates in Canada’s 150 Celebration Gardens and planted tulips (500 red, 500 white) last year to bloom in the spring.

Parks Canada offers free access to all national parks and national historic sites in 2017, but you will still need to purchase a free Discovery Pass online, at the gates, or at visitor centers. That means Pukaskwa National Park is free for day use (you still pay for camping) and access to Sault Ste. Marie Canal National Historic Site. You still pay to enter provincial parks.

Yes, in contrast to the first “Dominion Day” in 1867, the plans for the July 1, 2017 celebrations are looking spectacular.

Thunder Bay’s Elle Andra-Warner has written several history books covering everything from the Mounties to the Hudson’s Bay Company to Edmund Fitzgerald.

Dozens of historic Kitchener buildings up for protection

Coronavirus: What’s happening in Canada and around the world on May 11