A 31-year-old man charged with first-degree murder in the death of Toronto police Const. Jeffrey Northrup has been released on bail.

Zameer has been released on three sureties pledging a total of $335,000, with $50,000 deposited with the court prior to his release from custody, Hasan said.

He must live under house arrest with his sister and has been placed under an electronic monitoring supervision program. He is not allowed to leave Ontario, visit any international airport and must surrender his passport and travel documents to police. He’s also restricted from driving a car.

In a statement to CBC News on Wednesday, Hasan said: “Mr. Zameer’s family is very pleased with the outcome of today’s hearing. They welcome him home. I know it comes amidst a tragedy for officer Northrup’s family and again express my condolences.”

There is currently a publication ban on all evidence presented during Zameer’s two-day bail review held earlier this month, meaning the reason for Zameer’s release cannot be reported. However, Hasan said he would be fighting aspects of the ban and asking the court to release “a portion of its reasons” on the bail hearing.

Hasan said this would help the public to “better understand this case and why the court reached this decision.”

“When an individual charged with a serious crime has been granted bail, the public is inevitably curious about the reason,” he said.

“We can only respond that there is much more to this case and to this tragic situation than meets the eye. In due course, this will become clear.”

In a statement, the Toronto Police Service said “today’s decision by the court is one step in what will be a long judicial process.”

Northrup was killed after being struck by a vehicle in the parking garage at city hall shortly after midnight on July 2 in what investigators have called an “intentional and deliberate act,”

Police have said Northrup, who was a 31-year veteran working at 52 Division, and his partner were responding to a 911 call for a robbery in progress when they were struck.

Both were dressed in plain clothes but police say they could be identified by nametags around their necks.

Northrup was transported without vital signs to nearby St Michael’s Hospital, where he died. His partner was transported to the same hospital where she was treated for non-life-threatening injuries.

Shortly after the news of Zameer’s bail was made public, Ontario Premier Doug Ford tweeted his shock at the accused’s release, saying “this is beyond comprehension.”

“It’s completely unacceptable that the person responsible for this heinous crime is now out on bail. Our justice system needs to get its act together and start putting victims and their families ahead of criminals,” the tweet said. 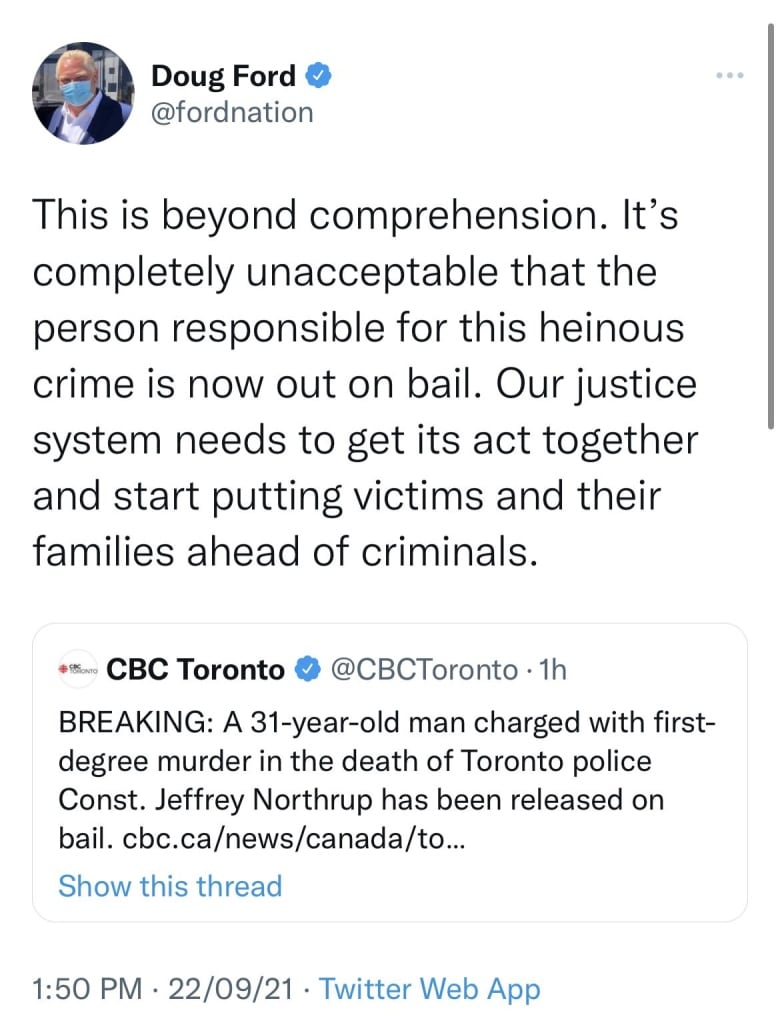 This is beyond comprehension. It’s completely unacceptable that the person charged for this heinous crime is now out on bail. Our justice system needs to get its act together and start putting victims and their families ahead of criminals. https://t.co/91l5PO0nDM

When questioned about the original tweet, Ford’s executive director of media relations, Ivana Yelich, said that the tweet had been “noticed” and “fixed.”

Dan Brown, vice-president of the Criminal Lawyers’ Association, said the premier’s comments undermine the public’s confidence in the justice system.

“It’s offensive that the premier of Ontario thinks that the presumption of innocence doesn’t apply simply because the victim in this case is a police officer,” Brown said.

“We have a very experienced judge consider all the evidence in the case, including evidence that the premier knows nothing about, and she applied the appropriate legal tests and determined that this individual ought to be released pending his trial.”

Northrup lived in Brampton with his wife and three children, ages 21, 19 and 17.

His funeral attended hundreds of officers alongside family members at BMO Field on July 12. Attendees also included Toronto Mayor John Tory and Ford, who both spoke at the service.

Master of ceremonies Supt. Peter Code told the amassed mourners that to fellow officers, Northrup was “the hardest of all workers” who would take on any task.