Masks on, snacks gone: A look at Ontario’s new concessions ban at venues

But Ontario’s new COVID-19 rule banning food and drink at venues means he has to shut down the snack bar at his movie theater — a restriction that’s never happened before.

Tutt can keep showing movies, but without pop, beer or popcorn. (He typically opts for all three).

“A huge part of the business is just going to be cut off from us,” says Tutt, manager of Hamilton’s Playhouse Cinema.

Concession sales vary day to day, but Tutt said they can make up to 50 per cent of a day’s revenue.

Lisa Blokland had already stopped buying concessions at Ottawa Senators games. She and her 13-year-old son — who have tickets for half of the games this hockey season — would typically buy pop or pizza.

She said concession lines at the arena have been huge since the season started, so the ban doesn’t really bug her.

Lisa Blokland and her son Russell have tickets to half of Ottawa Senators’ games this season. She says masking etiquette in the arena has slipped since the season began, and hopes the concessions ban means they get to keep going to games. (Submitted by Lisa Blokland)

The NHL has put the season on pause, affecting teams including the Senators, through Christmas, because of the surge in COVID-19 cases.

Blokland, a teacher from Arnprior, Ont., knows food and drink are huge money makers for venues. She worries for concession staff who may get laid off.

The idea behind the ban is to ensure audiences are wearing masks the entire time in a venue, and not taking it off for bites and sips.

“Then they won’t transmit the virus as readily,” said Angela Crawley, a scientist at the Ottawa Hospital Research Institute. “As soon as the masks come off, then your level of risk goes up.”

Ontario Morning from CBC Radio4:10No popcorn at the movies: Inside Ontario’s concessions ban

Ontario’s put a new ban on food and drink at sports games, concerts and theaters to curb the spread of COVID-19. Haydn Watters has more.

She says places like hockey arenas and movie theaters are “high-risk” activities, so the ban makes sense to her.

“This is temporary. This is emergency,” she said. “It’s inconvenient and it’s really too bad for the businesses.” 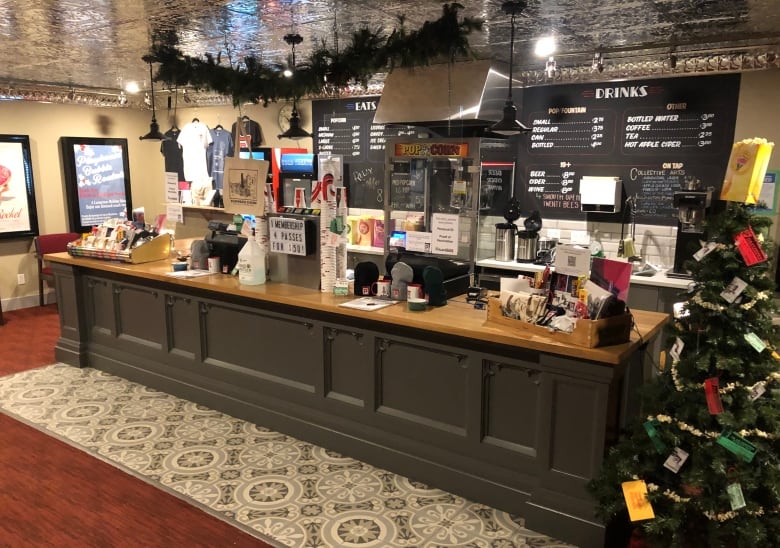 The snack bar at Hamilton’s Playhouse Cinema is all dressed up for the holidays, but not allowed to sell any food or drink, under Ontario’s new COVID-19 restrictions to curb the spread of the Omicron variant. (Submitted by Jacob Tutt)

Tutt is trying to figure out what to do with his food and drink inventory — “popcorn doesn’t have an infinite shelf life” — and is hopeful this will be a short-term restriction.

“There’s not a whole lot that we can do except roll with the restrictions and follow them and see the light at the end of the tunnel.”