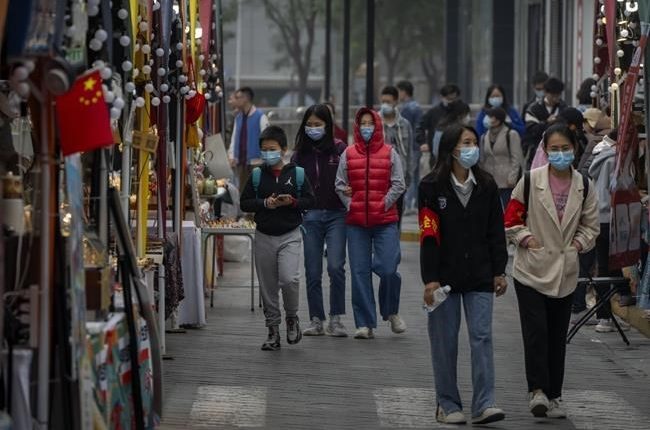 Mixed start on Wall Street ahead of US earnings reports

NEW YORK (AP) — Stocks are off to a mixed start on Wall Street ahead of the beginning of the corporate earnings reporting season, which will provide insight into how high inflation and high interest rates have been affecting US companies.

NEW YORK (AP) — Stocks are off to a mixed start on Wall Street ahead of the beginning of the corporate earnings reporting season, which will provide insight into how high inflation and high interest rates have been affecting US companies. A much anticipated monthly report on consumer price inflation is coming up Thursday, and the Federal Reserve will also release this week the minutes from its latest policy meeting. That’s when the Fed made another extra-big interest rate increase of three-quarters of a percentage point. The S&P 500 was waving between small gains and losses in early trading Monday.

BANGKOK (AP) — World shares were mostly lower on Monday, with Chinese markets logging moderate losses after reopening from a weeklong holiday to news of more lockdowns in China due to rising COVID-19 cases.

Shares fell in Hong Kong, Shanghai, Paris and London but rose in Frankfurt. Markets in Tokyo were closed for a holiday.

The declines followed yet another dismal end to the week on Wall Street as a strong US jobs report added to worries the Federal Reserve might consider the higher-than-expected hiring data as proof the economy hasn’t slowed enough to get inflation under control. That might mean still more hefty rate hikes that could make a recession more likely.

A US consumer prices report on Thursday will be one of the biggest factors for markets this week. Investors also are awaiting the latest updates on how companies are dealing with higher prices and interest rate hikes.

Chinese cities were imposing more lockdowns and travel restrictions after the number of new daily COVID-19 cases tripled during a weeklong holiday, ahead of a major Communist Party meeting in Beijing next week.

China is one of the few places still resorting to harsh measures to keep the disease from spreading. The long-ruling Communist Party is particularly concerned as it tries to present a positive image of the nation in the run-up to a once-in-five-years party congress that starts Sunday. The strict “zero-COVID” approach has taken an economic toll, particularly on small businesses and temporary workers. Many in China hope the pandemic policy will ease after the meeting.

The dollar was trading at 145.43 Japanese yen from 145.34 late Friday, adding to pressure on Japan’s central bank to counter the yen’s prolonged slide by adjusting its policy of keeping its benchmark interest rate below zero to fend off deflation.

Prices have been rising in Japan, pushed higher mainly by global inflation and surging costs for oil and gas, but the Bank of Japan has stuck to its ultra-loose monetary policy while the Fed has pressed ahead with sharp rate hikes. The higher expected returns have pushed the dollar higher against the yen.

The US government report showing employers hired more workers last month than economists expected might clear the way for the Fed to continue hiking interest rates aggressively, something that risks causing a recession if done too severely.

Oil prices also have kept pressure up on inflation, surging as big oil-producing countries pledged to cut production. On Monday, the US benchmark fell 92 cents to $91.72 per barrel in electronic trading on the New York Mercantile Exchange. On Friday, it logged its biggest weekly gain since March, jumping 4.7% to settle at $92.64 per barrel.

Beyond higher interest rates, analysts say the next hammer to hit stocks could be a potential drop in corporate profits. Companies are contending with high inflation and interest rates eating into their earnings, while the economy slows.