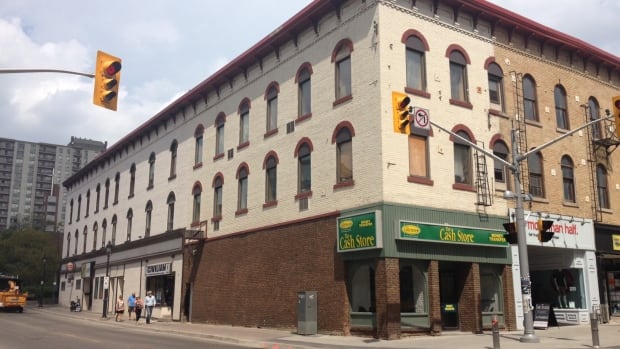 One of the oldest buildings in downtown Kitchener is under renovation – or at least part of it.

Stephen Litt of Revel Development has purchased a section of the American Block on the northeast corner at the intersection of King and Queen Streets. He wants to attract high-tech tenants on the upper floors and eventually boutique restaurants on the ground floor.

“This is the key corner in downtown Kitchener, in my opinion,” Litt said in an interview with Craig Norris in the morning edition on Wednesday.

“We dug and bought the old history books, including The Cash Store on King Street and all the way up to the Queen,” Litt said.

Litt says the American Block technically includes stores east of The Cash Store all the way through to Niko Niko Sushi, but at some point the block became fractionated and the package he bought is limited to the area given to the Queen Street borders.

Current tenants on the ground floor include The Cash Store, Civilian Printing and Caper’s Sports Bar.

“After some research, it is actually the oldest building in downtown Kitchener, built by the Breithaupt family around 1860,” Litt said. “[At that time] That side of King Street was the only side to develop on, the Walper side was actually swampy, “Litt said.

“There are historically older houses in this area, but this is the first building, three-story, right on the street.”

“It’s called the American Block, not exactly sure where the American concept came from, but each of those downtown buildings had block names,” said A little.

“The American Hotel – as it is most affectionately known – was in operation from 1862 until at least the mid-1960s [for] a minimum [of] They had a hotel there for 100 years, which is pretty cool, “he said.

The building was inscribed on the Kitchener’s Landmarks Register in September 2010 and has addresses at 1 Queen St North and 4-30 King Street East.

According to the City of Kitchener, the oldest building in the city is the Joseph Schnieder House and Museum.

Revitalization of the inner city

Litt’s building is just the newest in a series of buildings in downtown Kitchener that are attracting builders looking to renovate.

A group that includes Perimeter Development Inc. Zehr Group, David Strucke and CK Atlantis Ltd bought The Walper Terrace Hotel at the beginning of the year. The group plans to renovate the hotel and lobby.

Perimeter also owns 305 King St. West, which will house the mobile payment startup Square along with Gilt, a wine and tapas bar, and Pure, a café and juice bar.

Litt has similar plans for the American bloc. He bought the building in the spring of this year and has already started the renovation.

“We actually went in and gutted the top two floors. The ceilings were about 7’8 ” when we went in, they were dropped and we removed all wood, lots of character, jamb and joists and we are in the process of replacing the windows and doing some minor structural updates, “he said.

Litt hopes that a tenant will move in at the beginning of September.

“We’re going to retrofit an elevator to make it accessible to everyone,” he said.

As for the first floor, Litt says he has an idea of ​​what he would like and it includes “smaller retail grocery stores.”

“I often go to Duke Duke’s [Street] Grocery block all the time and there is incredible demand for these boutiques, smaller retail eateries. And this is just around the corner, so you could almost get on with the boutique food-blocking queen in fact.

Litt said Caper’s, the bar, would continue to occupy the room for now.

Litt noted that the building across the street that is currently the CIBC was once a brewery and suggested that a microbrew pub would be a great use of the first floor in his building.