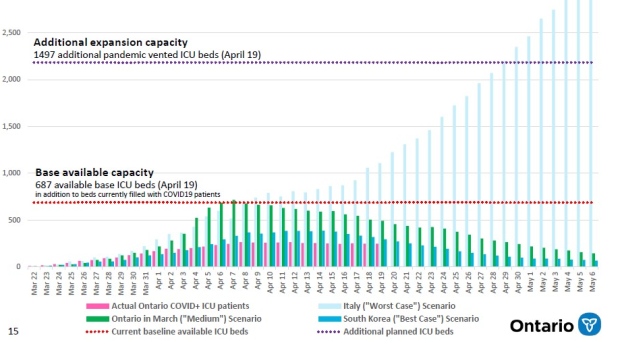 TORONTO – The wave of new cases of COVID-19 appears to have peaked in the province, according to Ontario health officials, but the spread to long-term care homes and other community facilities appears to be increasing.

The news comes as Ontario’s COVID-19 command table releases new modeling and potential scenarios in the province’s battle against the novel coronavirus.

“While previous models predicted a peak in cases in May, public health measures, including widespread adherence to physical distancing, have sped the peak to date,” the modeling report said.

The announcement comes after the province has seen the most cases of COVID-19 in a single day.

The projections released earlier this month painted a dark picture for the province. Health officials predicted that between 3,000 and 15,000 people in the province could die from COVID-19 with health interventions in place. In the worst case, the province said up to 100,000 people could die without public health measures.

While the modeling data released on Monday does not indicate how many people could die from COVID-19, it does provide some indication of the number of cases that could be reported in the province.

Health officials say the total number of cumulative cases for the duration of the outbreak is now likely to be less than 20,000, a far cry from the worst-case 300,000 possible cases the province had forecast by the end of the month.

Previous modeling data had predicted a peak in cases in May, but officials say the peak has accelerated to today thanks to public health measures including physical distancing and self-isolation.

“The climax is important because epidemics follow what is known as Farr’s Law, which means they are essentially symmetrical in shape,” said the University of Toronto’s Dalla Lana School of Public Health at a press conference Monday afternoon.

“Peaks are not a single day, peaks are not a beautiful single peak. They can be a little bumpy, they can lengthen over time, especially with public health interventions. But this is the peak time right now. “

Brown said that while his team expects the death rate from community-based transmission to drop, it is difficult to predict the number of deaths in long-term care homes as they are currently in an “accelerating upswing”.

As of Monday, there were 114 outbreaks in long-term care homes across Ontario, representing the deaths of 249 residents and one employee.

Last week, Ontario Prime Minister Doug Ford announced the provincial plan to peg a “ring” around such facilities that would include stricter testing and screening measures in outbreak homes and an emergency order restricting staff to work in a facility . This order comes into effect on Wednesday.

Forecasts of COVID-19 patients in the hospital

Based on data collected from both South Korea and Italy, Ontario health officials developed a best-case or worst-case scenario for how many patients with COVID-19 they are likely to see in an intensive care unit.

Ontario would see about 400 patients in intensive care at best and over 1,000 at worst on April 19. Currently, 247 are being treated in the intensive care unit for COVID-19.

Regarding the hospital’s total capacity, the province says that in the worst case scenario, around 1,500 patients could be hospitalized by April 19, and in the best case a little more than 500 patients. As of Monday morning, 809 patients were in the hospital in Ontario.

Despite the positive trend outlined in the data, the government decided last week to add more than 2,500 acute and ICU beds to their hospitals to avoid a possible spike in COVID-19 cases.

On the possible relaxation of public health measures

Ontario’s Associate Chief Medical Officer of Health Dr. Barbara Yaffe was asked about a possible lifting of public health measures after Monday’s report saying that such measures would be phased out.

“If we start lifting some of the measures, it won’t be a light switch,” said Yaffe. “It’s going to be very gradual and we need to measure the impact of each change as we make it and make sure we don’t see any more infections once we pick them up.”

‘”Once we save it, it will be very difficult to come back.”

Ford echoed Yaffe’s cautious optimism, saying that while the numbers are encouraging, the Ontarians “aren’t out of the woods yet”.

“Far from it. We’re still in the middle of a fight.”

However, Ford noted progress in the fight against COVID-19 in Ontario, saying that “there is light at the end of the tunnel”.

“I’m so proud,” he said. “We can all be proud that we rose as a province. We faced this enemy head-on. ”

“We listened to the experts and thanks to our joint efforts, thanks to all of you, we have since avoided the worst case we feared.”

The city of Toronto will release its own COVID-19 modeling report later in the day.