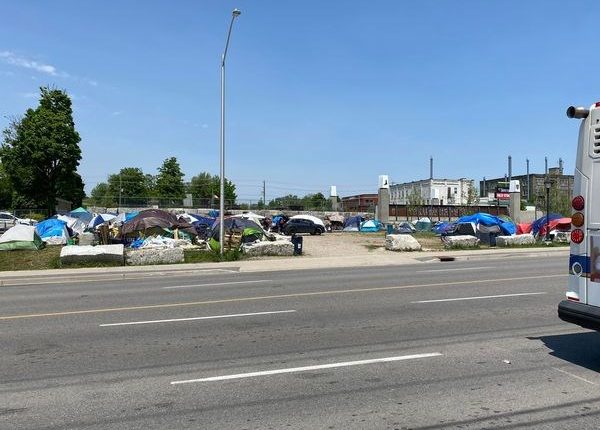 What comes next for those living at a Kitchener encampment now the legal effort to evict them is caught-up in the courts?

As of the latest head-count, the Region of Waterloo said as many as 70 tents still remained in the gravel parking lot at the corner of Weber and Victoria, while it some 50-55 people also continued to call the space home.

That is despite those residents being ordered to leave as of the end of June and as the courts continue to consider eviction options; although the next hearing date in that effort isn’t on the docket until early-November.

In the meantime, the region has said all options are on the table though, for the time being, the strategy does largely seem to entail more of the same — more outreach, more services, and more options to consider moving forward.

“We have staff at the encampment three or four times a week working to ensure the residents have access to income supports, are provided with opportunities to seek alternative housing arrangements for those that want to take us up on that, and we’re also doing our best to work with the neighboring businesses to ensure that to the best of our ability that site is safe for the people currently living there and for the businesses and the residents surrounding it,” said Peter Sweeney, Manager of Community Services with the Region of Waterloo.

Sweeney said a lot of the focus continues to be on ensuring basic necessities of life are met including access to clean drinking water and sanitation, and daily waste removal. He said more case workers will also be on-site this week to make sure residents have access to whatever resources may be available to them.

Sweeney did though also admit there is a gap in what resources are currently available compared to current demand.

“I’m proud of this community on so many different levels but I don’t accept that we should be okay with a thousand people at any given time being homeless in this community,” he said. “That’s the challenge ahead of us and I think it’s going to take a dedication of resources, commitment, and will power from all levels of government and from community to solve this.”

As for continued concerns from near-by neighbors and businesses, Sweeney said the Region will also be considering calls to ramp-up on-site security.

“We started with eight hours of security and moved it to 16 and now we’re being asked to consider providing that security 24/7 and so that is something that I’m taking back to our team.”

1 dead, up to 12 missing in landslide on Italian island

1 man arrested after another stabbed in Kitchener on Thursday