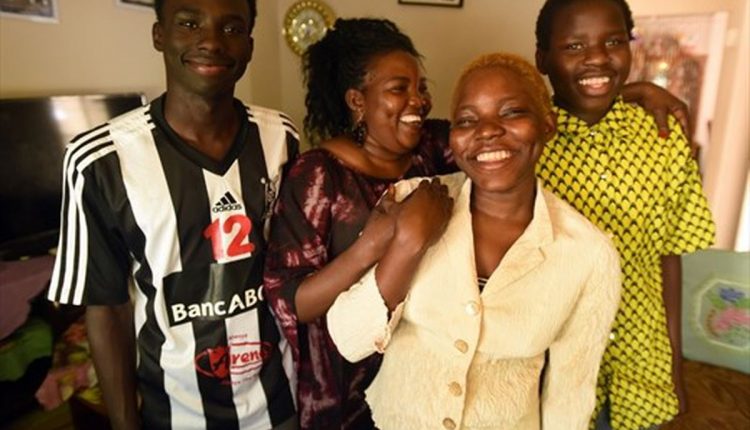 KÜCHENER – Sebit Wani Kujo remembers going to school in a refugee camp in Kenya. He remembers having a folder with loose-leaf paper and pencils.

And he also remembers being physically beaten by his teachers and trying to avoid recalcitrant brawls in the schoolyard.

Five years ago he and his family came to Canada as a refugee from the Kakuma refugee camp in northern Kenya.

Five years ago, Sebit couldn’t speak a single word of English. He could hardly read or write.

But now he reads Scovia to his mother and it makes her proud. “I’ve never been able to read like this,” he says.

It’s hard to imagine getting used to a new life in a foreign country growing up in a refugee camp.

This struggle is one of the reasons why the United Nations created World Refugee Day in 2001. Celebrated on June 20th each year, the day brings awareness and hope to millions of displaced people who have fled their homes due to conflict and persecution.

Judith Paul, 12, came to Canada from Kenya four years ago and sometimes cannot believe how far she has come.

“I didn’t even know how to spell my own name,” said the bubbly, energetic 7th grade student. Now she is fascinated by science classes and loves class experiments.

She said she never knew that “science is everything”.

Judith and Sebit are two of 12 students in the Accelerated Basic Literacy Education Program (ABLE) at AR Kaufman Public School, a special education program offered by the Waterloo Region District School Board. It is aimed at students with little or no education or with gaps in their previous education.

Like Judith and Sebit, these students are mostly refugees from conflict areas and war-torn countries.

AR Kaufman has one of each class. The program has been running for nearly 20 years and serves 50 students annually. The fast-track curriculum is two school years in one to help students catch up and benefits from small classes.

Kim Cavanagh saw waves of refugees pour through her classroom doors. She has been teaching the Senior ABLE class at AR Kaufman for eight years.

In 2006, most of her students came from Sudan and Afghanistan.

This year it’s more of a mixture: students come from Iraq, Somalia, Eritrea and Burma.

But refugees from Kenya are an integral part of the AR Kaufman Public School. The country is home to thousands of refugees from its war-torn neighbors, including Somalia, South Sudan, Uganda and Ethiopia.

Judith and Sebit only knew life in refugee camps. Judith frowns slightly at the memory of going to school in Kenya.

“It was dangerous, people would kill each other all the time,” she said. “It’s much safer here … the government and the police are here to protect you.”

Trust is one of the most important factors in integrating new children into the program, Cavanagh said.

“The children are brought here from all over the city,” she added. “Parents can be very anxious. So it’s pretty scary … we have to build our trust. “

Cavanagh and fellow educators work hard to build the trust of students and their families. They make frequent house calls and communicate with parents, often with the help of interpreters.

Sometimes the trauma their students experienced in their past bubbles up as they adjust to Canadian life.

“I think it still stays, I don’t think it will ever go away,” she said. “There are scenes that go on in their heads.”

Sometimes students exhibit behavioral problems at the beginning and have difficulty coping with regularity and responsibility.

“Many of them come from lawless societies,” Cavanagh said. “So we try to have this open dialogue.”

Sebit remembers crying on his first day of school in Kitchener when he was in 4th grade. He couldn’t understand the other children. He felt isolated, alone, and scared.

Judith recalls rudeness and cruelty on her first day of school in New Brunswick, where her family first landed in Canada four years ago.

“They insulted me, threw snow at me,” she said. “But I couldn’t speak English very well and just went to my teacher and started crying.”

For this self-confident girl, who can now navigate the city by public transport on her own, everything that she used to be afraid of is in the past.

Judith and Sebit have come a long way, but both worry that their parents will be left behind.

As the oldest of four children, Judith helps translate phone calls for her parents and helps them understand the words of the bank employees.

But she said that sometimes she doesn’t quite understand what the “lady from the bank” wants to say to her father, who speaks very little English. After all, she is 12. But she still tries to translate.

Sebit’s older siblings sometimes help translate for his parents. But he wished they’d learn to speak better English too.

“I want to teach my mother how to do it so she can do things herself so she doesn’t need me there,” he said.

Judith feels the same way. She said her mother spoke a little English but not enough to be comfortable in conversation.

“Sometimes they are invited to do things where there are people who are Canadians and they don’t know what to do because they are afraid that it will be rude to speak or try to do something,” she said.

But they also help their parents learn with their own newly developed skills.

Judith and Sebit have not only caught up in school when it comes to writing, reading and critical thinking, they are also more self-assured, more self-confident and more socially active.

“You’ve both learned to articulate yourself and develop a sense of self,” said Cavanagh.

She said students often keep in touch after they leave AR Kaufman and see them go to high school and college. It will always feel wonderful to her.

“It’s amazing to get them to see their potential,” said Cavanagh.

• In 2013 Canada accepted 10,350 individual asylum seekers from around the world
• This number is less than half of the 20,469 people who were admitted the previous year
• In December 2014, 149,163 refugees were living in Canada
• About 50 percent of all refugees and asylum seekers live in Ontario

• Every year on June 20th, the United Nations and other social organizations around the world celebrate World Refugee Day to recognize over 15 million displaced people who have been forced to leave their homes due to persecution, conflict and war
• The first World Refugee Day was 2001
• On Saturday, join the Mennonite Coalition for Refugee Support on their Walk with Refugees for a Stronger Canada, from the Reception House to Victoria Park from 10:00 am to 12:30 pm
• See an art exhibition for refugee youth at the Themuseum, 10 King St. W., Kitchener
• Get involved in the following social institutions that offer help and support to local refugees:
The Mennonite Coalition for Refugee Support, 58 Queen St. S., Kitchener, visit their website at www.mcrs.ca.
Reception House Waterloo Region, 101 David St., Kitchener, visit their website at www.kwrcentre.ca www.kwrcentre.caEND
Sources: Citizenship and Immigration Canada, United Nations Human Rights Commission