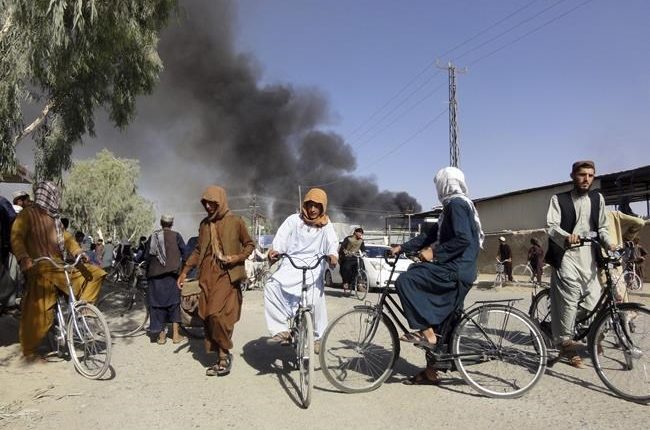 KABUL, Afghanistan (AP) – An Afghan official says the Taliban had launched a multi-pronged attack on Mazar-e-Sharif, a large city in northern Afghanistan that is being defended by powerful former warlords.

KABUL, Afghanistan (AP) – An Afghan official says the Taliban had launched a multi-pronged attack on Mazar-e-Sharif, a large city in northern Afghanistan that is being defended by powerful former warlords.

Munir Ahmad Farhad, a spokesman for the provincial governor in northern Balkh province, said the Taliban attacked the city from multiple directions early Saturday. There was no direct information about the victims.

Afghan President Ashraf Ghani flew to Mazar-e-Sharif on Wednesday to rally the city’s defenses and met with several militia commanders allied with the government.

The Taliban seized a radio station in Kandahar and went over the airwaves on Saturday after conquering much of southern Afghanistan in a swift offensive that raised fears of a full takeover less than three weeks before the last troops were withdrawn by the US.

The Taliban have conquered much of northern, western and southern Afghanistan in recent weeks, giving the western-backed government control of some central and eastern provinces, as well as the capital Kabul and the northern city of Mazar. i-Sharif.

The withdrawal of foreign troops and the swift withdrawal of Afghanistan’s own troops – despite hundreds of billions of dollars in US aid over the years – have raised fears that the Taliban may return to power or the country may be plunged into civil war.

The first Marines from a contingent of 3,000 arrived Friday to assist with the partial evacuation of the U.S. embassy. The rest are due to arrive by Sunday, and their deployment has raised questions about whether the government will meet its August 31 exit deadline.

The Taliban released a video in which an unnamed insurgent announced the takeover of the city’s main radio station, renamed the Voice of Sharia or Islamic Law. He said all staff were present and would send messages, political analysis and recitations of the Koran, the Islamic holy book. Apparently the station is no longer playing music.

It was not clear whether the Taliban had cleaned up the former employees or allowed them to return to their jobs. Most of the residents of Kandahar wear the traditional clothing preferred by the Taliban. The man in the video congratulated the people of Kandahar on the Taliban’s victory.

The Taliban have operated cell phone stations over the years, but have not operated a transmitter in a major city since ruling the country from 1996 to 2001. At that time they also operated a station called the Voice of Sharia from Kandahar, the birthplace of the militant group. Music was banned.

The US invaded shortly after the 9/11 attacks planned and carried out by al-Qaeda under the protection of the Taliban. After the Taliban’s swift expulsion, the US turned to nation-building in the hope of creating a modern Afghan state after decades of war and unrest.

Earlier this year, President Joe Biden announced a schedule for the withdrawal of all US troops by the end of August and promised to end America’s longest war. His predecessor, President Donald Trump, had reached an agreement with the Taliban to pave the way for a US withdrawal.

Biden’s announcement launched the latest offensive. The Taliban, who have long controlled large parts of the Afghan countryside, moved quickly to seize provincial capitals, border crossings and other vital infrastructure. You are now within 80 kilometers (50 miles) of Kabul.

Tens of thousands of Afghans have fled their homeland, many fear a return to the oppressive rule of the Taliban. The group had previously ruled Afghanistan under a harsh version of Islamic law in which women largely stayed at home.

Rahim reported from Istanbul and Krauss from Jerusalem.