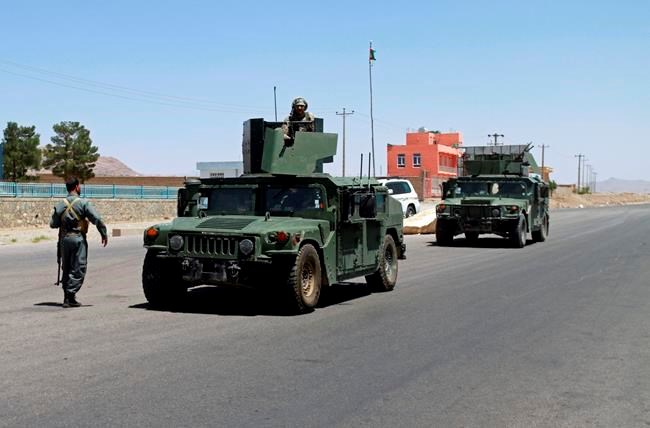 KABUL, Afghanistan (AP) – The Taliban took control of another provincial capital in Afghanistan on Monday, an official said.

KABUL, Afghanistan (AP) – The Taliban took control of another provincial capital in Afghanistan on Monday, an official said. The fall of the city was the last in a week-long, relentless Taliban offensive as American and NATO forces complete their withdrawal from the war-torn country.

The militants have stepped up their advance in large parts of Afghanistan and aimed their weapons at provincial capitals after capturing large swaths of the predominantly rural area. At the same time, they are conducting an assassination campaign against high-ranking government officials in the capital, Kabul.

The raid comes despite condemnations from the international community and warnings from the United Nations that a military victory and takeover by the Taliban will not be recognized. The Taliban also ignored appeals to return to the negotiating table and to continue the long stalled peace talks with the Afghan government.

According to Mohammad Noor Rahmani, the council chief of the northern province of Sar-e Pul, after more than a week of resistance from the Afghan security forces, the Taliban overran the provincial capital, whereupon the city of Sar-e Pul collapsed. The government troops have now completely withdrawn from the province, he said.

Several close-to-government commanders of local militias also surrendered to the Taliban without a fight, which allowed the insurgents to take control of the entire province, Rahmani added.

The Taliban are also continuing to fight for control of the city of Kunduz, the capital of the northern province of Kunduz. On Sunday, they planted their flag in the city’s main square, where it was flown on a traffic police booth, a video obtained from The Associated Press showed.

The capture of Kunduz would be a significant win for the Taliban and a test of their ability to conquer and hold territory in their campaign against the West-backed government. It is one of the larger cities in the country, with a population of more than 340,000, and has been a key area over the years defended against the Taliban takeover by Western forces.

After billions of dollars spent on supporting, training and reinforcing the Afghan armed forces, many disagree on how to explain the surprising Taliban lightning strike that threatened – and has since destroyed – several of the country’s 34 provincial capitals.

Rahmani, the council chief of Sar-e Pul, said the provincial capital had been besieged by militants for weeks without reinforcements sent to the overburdened Afghan armed forces. A video circulating on social media on Monday showed a line of Taliban fighters standing in front of the Sar-e Pul governor’s office congratulating each other on their victory.

The Taliban’s nationwide offensive intensified when US and NATO forces completed their withdrawal from Afghanistan this summer. Faced with mounting Taliban attacks, Afghan security forces and government forces have retaliated with US-backed air strikes. The fighting has also raised concerns about civilian casualties.

The insurgents have also captured most of Lashkar Gah, capital of southern Helmand province, where they captured nine of the city’s ten police districts last week. Fierce fighting continues there, as well as air strikes by the US and Afghan governments, one of which damaged a clinic and high school.

The Defense Ministry confirmed the air strikes had occurred but said they had targeted Taliban positions, killing 54 fighters and injuring 23. Deputy provincial council chair Majid Akhund said the facilities were under Taliban control when they were attacked.

However, attacks of revenge and repressive treatment by women have been reported in areas now under Taliban control.

‘This could be resolved today’: CUPE workers hold rally in downtown Kitchener