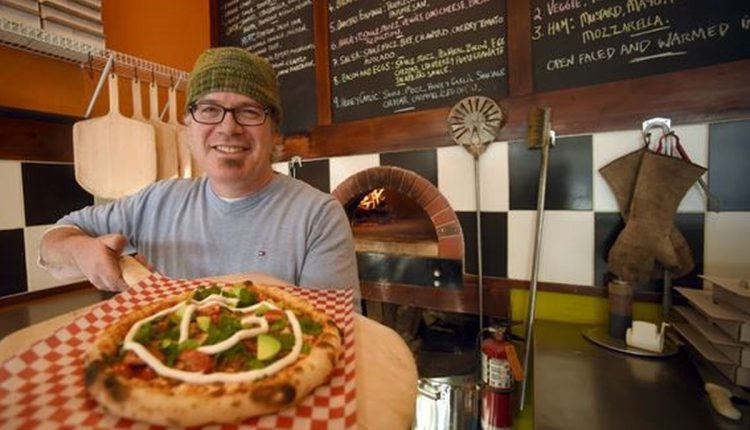 The Kitchener food truck debate – from both sides of the kitchen

KITCHENER – Last week, food truck operators came to town hall pleading for fewer regulations so they can flourish and revitalize the dining scene in downtown Kitchener.

This week downtown restaurant owners came out to present their case, arguing that food trucks’ low overheads and ability to go where the business is gives them an unfair advantage.

But while the food truck debate is whirling around town hall, there are a handful of businesspeople who have a unique perspective on the whole question: those who own both restaurants and mobile food companies.

Chris Corrigan owns the Lancaster Smokehouse Restaurant as well as the food truck of the same name, from which he offers a variety of Southern Barbecue. David O’Leary started out mobile dining, serving wood-fired pizzas in a portable Italian oven, and established a permanent store with Bread Heads’ wood-fired kitchen in the Duke Food Block downtown 2 years ago, but still runs his cell phone business during the warmer months.

Corrigan believes food trucks are simply adding another exciting dimension to the Kitchener dining scene. “They add a tie. They bring vibrancy and they create a culture.”

He believes food trucks will not cut into the downtown restaurant business, but rather bake a bigger cake that all businesses can benefit from. “If they have the KOI Music Festival or the downtown Blues Festival, are they going to put Bobby O’Briens (pub) out of business? No – they are contributing to it.”

In the same way, food trucks will make more people think about eating downtown, argues Corrigan. They’re not the canteens and hot dog stands of yore, but full kitchens where food is cooked from scratch using local ingredients, he said.

O’Leary is not convinced.

When the city allowed food trucks at Center In The Square last summer, he and the other restaurateurs at the Duke Food Block anticipated business failure, assuming that the nearby food trucks would suck guests away.

Although it seemed like a natural market, with the center’s regional headquarters, public library, and summer programs all being a source of potential customers, few food trucks showed up. They didn’t create a lot of buzz or traffic, he said.

Admitting any number of food trucks downtown will likely not generate traffic, but will simply pull business away from restaurants that have long-term commitments at their core and cannot just pull in and move on when business is slow.

Both agree that the reality in Canada is that food trucks will not pose a major threat for much of the year. As Corrigan points out, few people will be tempted to leave a warm office and stand around for 10 minutes while a food truck prepares lunch in the cold weather Kitchener is experiencing this week.

“I think there is one common ground that could be found once the myths about the food truck threat are dispelled,” Corrigan says. “Let’s try. Try it. If it doesn’t work, be ashamed of us.”

He agrees that it may not be sensible to allow food trucks on the heavily trafficked Carl-Zehr-Platz, but suggests that a few regular parking spaces on King Street be reserved for the trucks would make sense.

O’Leary believes that food trucks make sense in places like industrial parks that have limited dining options but cannot be essentially unregulated.

However, O’Leary points out that many restaurants also rely on customers looking for a quick meal, and the introduction of food trucks into the mix doesn’t add anything other than competition from trucks that are lower cost and less expensive for the inner city.

He bitterly realizes that he would have to pay $ 319 a year to set up tables and chairs in front of his restaurant, a little less than the annual license of $ 360 for a food truck.

If a food truck operator isn’t making a lot during the week, he or she can attend a festival or special event on the weekend, says O’Leary. But for downtown restaurants, Monday through Friday lunch “pays the bills”.

$347K raised and counting: It was a holiday party on Metro Morning for Sounds of the…