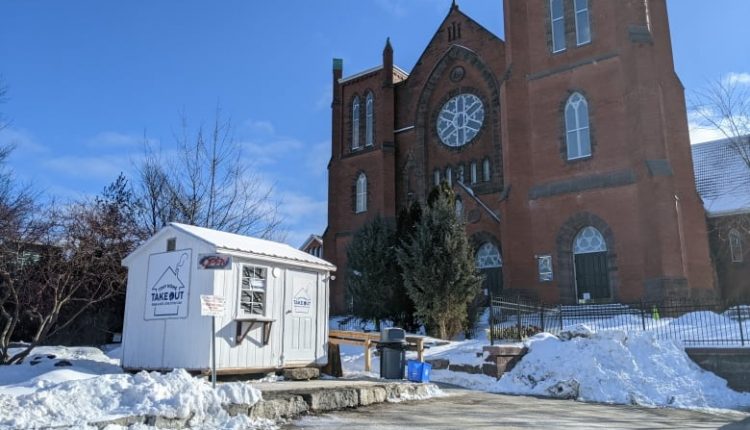 It may be small, but the new Tiny Home Takeout in front of St. Mary’s Roman Catholic Church in downtown Kitchener can produce 12 personal pan pizzas in three minutes and at least 150 soups in the two hours it’s open.

So says Father Toby Collins, who was behind the initiative to serve fresh quality meals for free, regardless of a person’s economic situation.

This idea came to him when he was sitting down to eat with other members of the religious community.

“I was thinking, why can’t you eat what we’re going to have tonight,” said Collins. “I worry about people eating these emergency supplies, and sometimes it comes out of a can. And I think we can do better. “

He reached out to people and organizations in the region who had expressed an interest in public relations.

This led to a kitchen renovation in the church cellar and the design of the tiny snack hut in front of the church.

Much of the food is donated locally by local restaurant vendors and prepared by chef Amy Cyr.

Some people who can afford to pay donate when they pick up food.

“We also get a lot of people who have the means to come by and say, ‘I want to contribute,’ and we say, ‘Take some food first.’ You’re a little shy and say, ‘No, it’s for someone else.’ We say, ‘It is for everyone.’ And they donate, “said Collins.

“We realize that as long as we get some input, we have enough resources for everyone, because as the tagline goes, ‘Dig a bite. Give if you can. ‘”

The takeaway location is located on Duke and Young St. in downtown Kitchener and is open Tuesday through Saturday between 5:00 p.m. and 7:00 p.m. (Jackie Sharkey / CBC)

Most actively traded companies on the Toronto Stock Exchange