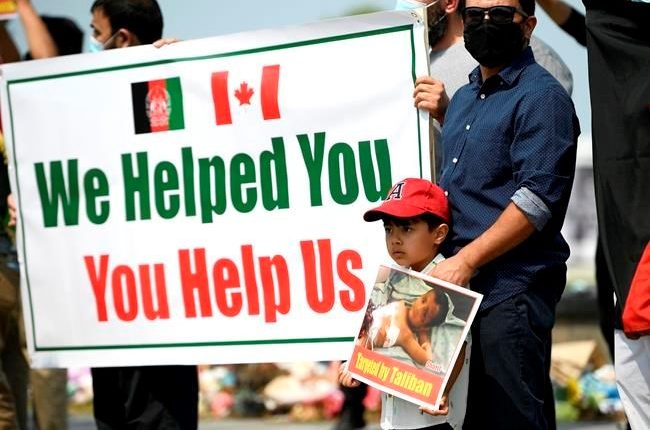 ‘Troubling lack of transparency’ from Ottawa on Afghan refugees: advocate

OTTAWA – The federal government should speak more clearly about who is included in their evacuation plans from Afghanistan, said the founder of a national lobbying campaign to bring interpreters and local staff to Canada.

OTTAWA – The federal government should speak more clearly about who is included in their evacuation plans from Afghanistan, said the founder of a national lobbying campaign to bring interpreters and local staff to Canada.

Andrew Rusk, Capt. Nichola Goddard, who died in Afghanistan in 2006 and became the first Canadian female soldier to die in combat, said the government should announce how many Afghan refugees were on a plane that left Toronto Wednesday.

The flight marked the first arrival of refugees supporting the Canadian military and diplomatic mission in Afghanistan. More planes carrying Afghans who contributed to Canada’s mission are expected in the next few days and weeks.

Immigration Minister Marco Mendicino said the federal government will not share details about the number and whereabouts of the Afghan refugees who landed in Canada on Wednesday and those who arrive later in order to protect the evacuees and the security of the operation.

In a virtual press conference Thursday, he said the government is facing urgent and volatile circumstances in Afghanistan as United States-led international coalition forces continue to withdraw from the country and the Taliban gain ground.

Rusk said the security of the operation is important, but failing to disclose the number of Afghan refugees who have arrived and those who will arrive later is inconsistent with what the US government is doing.

“It is not clear why our approach to security is inconsistent with the United States’ interpretation of security,” said Rusk.

He said his group had identified more than 700 families whose members supported the Canadian operation in Afghanistan.

“If you include locally employed personnel and contractors, especially contractors who work for NATO, where they support Canada, but also other countries that are currently in a bureaucratic no-man’s-land, the total could be significantly higher.”

At the time, Mendicino said the plan could potentially involve “several thousand” Afghans.

The federal government should ensure that everyone who supported the Canadian military and diplomatic mission in Afghanistan is eligible for evacuation, said Rusk.

Rusk said the government should include families of interpreters already in Canada, families who have already fled Afghanistan to a third country, human rights workers, journalists and other Afghan workers hired by the Canadian government or Canada-funded organizations .

He said any groups calling his campaign to evacuate Ottawa are potential targets for the Taliban.

“Right now, instead of doing the right thing, we’re letting the bureaucracy dictate who gets involved and who doesn’t,” said Rusk.

Mendicino said the plan to evacuate Afghans who supported Canada’s mission will be “inclusive,” but he made no commitments to the families of Afghan interpreters who are already in Canada, families who have fled to a third country. as well as involving journalists and human rights advocates his plan.

The Afghan refugees will receive government assistance that includes income support and language training during their first year in Canada, Mendicino said.

Resettlement agencies will help Afghan newcomers find accommodation and provide them with information about life in Canada, he said.

“That’s just the beginning. And there are still many challenging days ahead of us, ”he said.

“We continue to work around the clock here and abroad to help Afghans at great risk to help Canada.”

Prime Minister Justin Trudeau said at a press conference in Montreal that he was “pleased” that the first group of Afghans are landing in Canada and that his government will work to bring “as many of them as possible” into the country.

This report from The Canadian Press was first published on August 5, 2021.

This story was produced with financial support from Facebook and the Canadian Press News Fellowship.