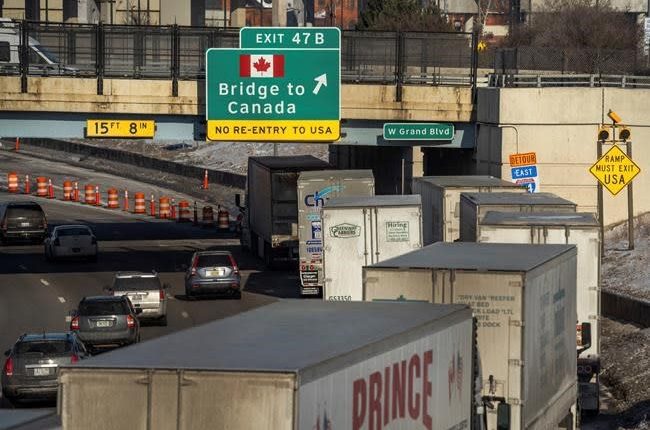 Amid delivery backlogs and bottlenecked ports, trucker blockades at US border crossing points have added more pressure to an already overloaded supply chain, with the food and automotive sectors particularly vulnerable.

Since Monday, protesters have cut off Canada-bound traffic on the Ambassador Bridge between Detroit and Windsor, Ont. — the busiest crossing in North America — in a show of solidarity with demonstrators protesting vaccine mandates and other COVID-19 restrictions in Ottawa.

The crossing typically handles about 7,000 commercial vehicles a day carrying more than a quarter of the roughly $500 billion in annual trade between Canada and the United States, according to the US Department of Transportation.

A group of 70 trade organizations including the Canadian Chamber of Commerce has called for a “swift and immediate clearing” of the blockade, citing the need for a steady supply of food, medical products and industrial parts.

Lanes were shut down in both directions Monday night. Trucks began moving into the US Tuesday morning, but not the reverse.

The delays could result in higher food prices and more spoilage, due to longer, costlier routes as trucks are diverted, leaving produce less time on shelves before getting too ripe.

“Already we are seeing delays in product of 12 to 24 hours in deliveries,” said Gary Sands, a spokesperson at the Canadian Federation of Independent Grocers, noting that the majority of products at the Ontario Food Terminal this time of year arrive via the Ambassador Bridge.

Fruits and vegetables will arrive on grocery shelves — and kitchen counters — less fresh.

Between $8 billion and $12 billion in agri-food crosses the Ambassador Bridge in both directions each year, Charlebois said, with some 45 per cent of Ontario agri-food imports arriving via the suspension bridge over the Detroit River.

The blockade also puts a spoke in the wheel of just-in-time manufacturing networks, which are already gummed up by international supply problems.

“For my members Toyota and Honda, they have been muddling through the last couple of days but I suspect that some production lines will be in jeopardy later today,” David Adams, president of the Global Automakers of Canada, said Wednesday afternoon.

Global automaker Stellantis confirmed it had cut short the bulk of its shifts at its Windsor assembly plant Tuesday due to parts shortages caused by the blockade. The facility resumed production again Wednesday morning.

“A number of our key crossings between Canada and the United States are either over or under bodies of water. You can’t simply slap on another lane, and as a consequence it leaves our logistic system very vulnerable,” Canadian Chamber of Commerce president Perrin Beatty said in a phone interview.

A live camera feed of the Ambassador Bridge resembles a freeze frame on the Canadian side with its empty road and motionless checkpoints, while the view of traffic into the US captures a thin stream of tractor-trailers entering Michigan.

Meanwhile at the border crossing in Coutts, Alta., traffic continues to be shut down on and off as protesters vowed to dig in for the long haul despite Premier Jason Kenney lifting the province’s vaccine passport program, effective today.

In the capital, downtown arteries remain jammed after thousands of demonstrators took to the streets to protest pandemic measures as part of a nearly two-week event that is ongoing.

Backed by a chorus of blaring horns, the participants encompass a grab bag of grievances that have sparked confrontations and 60 criminal investigations. Starting Sunday, police have tried to get a firmer grip on the scene below Parliament Hill, seizing thousands of liters of diesel fuel and hauling away an oil tanker and a plywood shack.

“If there were to be prolonged blockages at key entry points into Canada, that could start to have a measurable impact on economic activity in Canada,” he told reporters following a speech at a Canadian Chamber of Commerce event.

“We’ve already got a strained global supply chain, we don’t need this. Canadians are looking to buy goods, Canadian business are looking to export goods, and I think the sooner we can get this resolved the better.”

This report by The Canadian Press was first published Feb. 9, 2022.

Conestoga College in Kitchener to keep COVID-19 policies in place

Official Who Authorized COVID Vaccines in Canada Not Consulted on Mandate