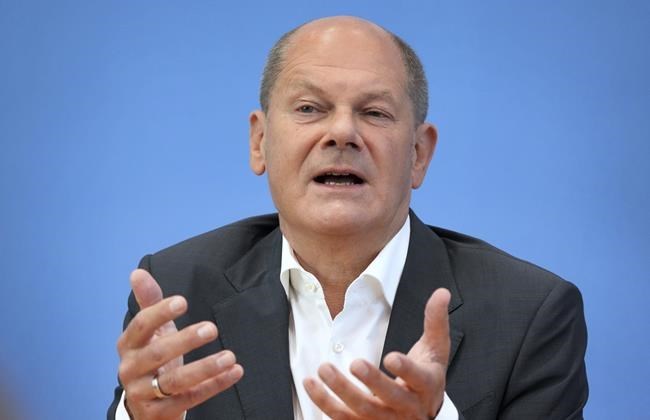 With international eyes on Newfoundland’s hydrogen potential, some remain skeptical

ST. JOHN’S, NL — As Germany turns to Canada for energy, all eyes are on a cluster of small western Newfoundland towns that could soon be home to two massive wind-powered hydrogen and ammonia projects. But there is skepticism among observers.

ST. JOHN’S, NL — As Germany turns to Canada for energy, all eyes are on a cluster of small western Newfoundland towns that could soon be home to two massive wind-powered hydrogen and ammonia projects.

But there is skepticism among observers. Environmentalists worry the provincial government is moving too fast and trying to capitalize on renewable energy at all costs. Others say they feel uncomfortable with the close ties between the premier of the province and a wealthy businessman backing one of the proposals.

“I think we need a complete reimagining of how we advance energy transmission, production and distribution in Newfoundland and Labrador, and focus on how we can return benefits to communities and not just to corporations,” Nick Mercer, a post-doctoral researcher with Dalhousie University who has worked with northern communities on sustainable energy development, said in a recent interview.

“We all know this is one of the windiest places in the world. But we can’t just give it away for nothing.”

News that Prime Minister Justin Trudeau and German Chancellor Olaf Scholz will be in Stephenville, NL, on Tuesday to sign a hydrogen energy agreement has thrown Newfoundland into the spotlight.

While details of the agreement haven’t been released, Germany has been clear it is keen to find new sources of energy after Russia’s invasion of Ukraine. The war has led to a surge in natural gas prices, and to Russia threatening Germany’s energy supply. Germany typically gets about half of its natural gas from Russia and is looking for both short and long-term solutions to wean itself from Russian exports.

Newfoundland and Labrador, meanwhile, is home to some of the strongest winds in Canada. In April, the provincial government lifted a moratorium on wind development, throwing open the doors for large-scale projects. Two green hydrogen projects, pitched for the region surrounding Stephenville, would put western Newfoundland at the forefront of Canada’s renewable energy transition.

The newest proposal is led by Australia-based Fortescue Future Industries and details about the project are scarce. The company said Thursday it filed paperwork with the province for a hydrogen and green ammonia production plant, a liquid ammonia marine export terminal and wind power facilities. That paperwork has not yet been made public.

More details are known about the second project, led by a consortium of four partners calling itself World Energy GH2. The first phase of the proposal calls for building up to 164 onshore wind turbines to power a hydrogen production facility in Stephenville. Long-term plans call for tripling the project’s size.

If approved, the project would be the first of its kind in Canada.

Among the companies behind the World Energy GH2 consortium is CFFI Ventures Inc., led by Nova Scotia-based billionaire John Risley, who is best known as co-founder of Clearwater Seafoods. Brandan Paddick, a well-connected businessman and close friend of Newfoundland and Labrador Premier Andrew Furey, is listed as an “active co-investor” in CFFI.

Paddick is the former chair of a provincial energy corporation. He recently resigned as head of a provincial energy analysis team whose formation was not made public until news outlet allNewfoundlandandLabrador.com uncovered it. Paddick, CFFI and World Energy GH2 partner Horizon Maritime Services together donated $46,800 to Furey’s Liberals during the 2021 provincial election year.

Paul Wylezol, a chairperson with the International Appalachian Trail, said he worries the provincial government won’t give the World Energy GH2 project the scrutiny he feels it deserves, given the tight connections of its proponents. Wylezol said he also worries about its environmental impact — particularly the second-phase plans to erect more 200-metre high wind turbines in an area his group has spent years trying to get recognized as a UNESCO Global Geopark.

Wylezol said people felt blindsided by the project. The provincial government announced it on June 22, with a deadline for public input on July 27.

“We all need more information on the benefits, the impacts and the liabilities, and we’re not getting nearly enough information,” he said in a recent interview. “And they’re trying to move too fast.”

The government has since asked the company to provide a full environmental impact study.

Chief Jasen Benwah of the Benoit First Nation said in an interview that he was relieved the government asked World Energy GH2 for a full environmental review. The consortium has since consulted with local leaders, and Benwah said people were coming around to the project’s potential environmental and economic benefits.

“Our wind is gold,” Benwah said. “We get a breeze here all day long, every day. And now that’s worth money, and it’s part of the green energy of the future.”

Mercer, however, is less optimistic. Though he’s long been an advocate for the oil-producing province to move to renewables, he said he worries the province is in a gold rush-style race to develop renewables at all costs, similar to its past approach with fossil fuels.

“We have to do it in a way that’s fair, in a way that builds community, and in a way that actually maintains and enhances our values,” he said. “I don’t know if massive industrial green hydrogen development meets that threshold. I think the jury is still out.”

This report by The Canadian Press was first published Aug. 20, 2022.

Note to readers: This is a corrected story. A previous version said the deadline for public input was June 27. It was, in fact, July 27.

Police are looking for a suspect after robbery at Kitchener mall